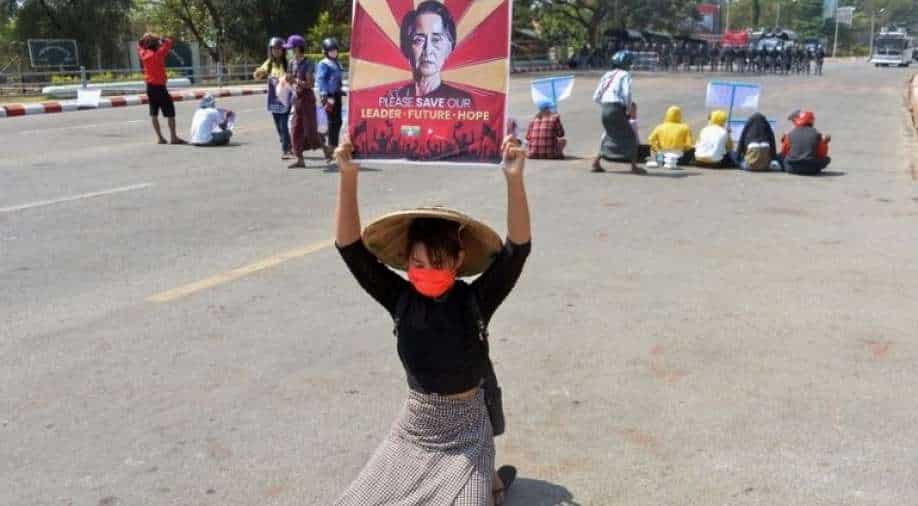 A protester holds up a sign calling for the release of detained Myanmar civilian leader Aung San Suu Kyi during a demonstration against the military coup (file photo). Photograph:( AFP )

Suu Kyi had been moved this week from house arrest in the capital Naypyitaw to an undisclosed location, the Myanmar Now website said, quoting officials of her National League for Democracy (NLD) party

Police dispersed protesters in Myanmar's two biggest cities on Friday, firing stun grenades, rubber bullets and guns into the air in a crackdown on weeks of demonstrations that have challenged the army's bid to re-impose its rule.

At least one person was wounded in the protests in the main city of Yangon, a witness said, and several people were hurt in the second city of Mandalay.

The Southeast Asian country has been in crisis since the army seized power on February 1 and detained government leader Aung San Suu Kyi and much of her party leadership after the military complained of fraud in a November election her party won. The election commission said the vote was fair.

Suu Kyi had been moved this week from house arrest in the capital Naypyitaw to an undisclosed location, the Myanmar Now website said, quoting officials of her National League for Democracy (NLD) party.

A lawyer for Suu Kyi said he had been told the same by NLD officials. He earlier complained that he had been given no access ahead of a court appearance set for March 1.

There have been daily protests and strikes by democracy supporters for about three weeks, often drawing hundreds of thousands of people across the ethnically diverse country.

In Yangon, hundreds of people congregated again in several groups, chanting slogans. Riot police rushed at them, firing stun grenades and guns into the air to send people scattering.

"One house let me in to hide," a journalist told Reuters from the scene. "I can`t leave yet as the police are very near and firing into the air."

Several people were detained, witnesses said, among them a Japanese journalist who was held briefly.