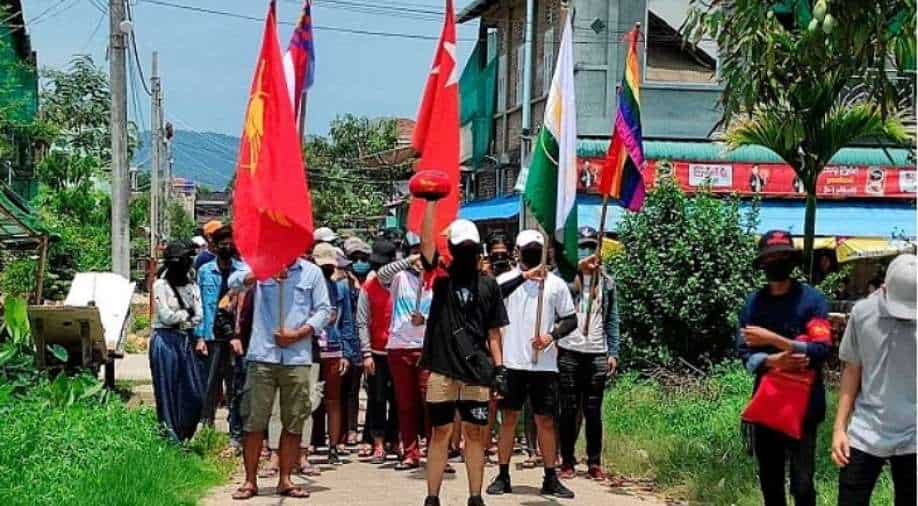 Demonstrators carry flags as they march to protest against the military coup, in Dawei, Myanmar April 27, 2021. Photograph:( Reuters )

Rights organisations claim that following the coup launched by the Myanmar military on February 1, 2021, the country's general human rights situation has gotten worse. Since the military took over, a widespread crackdown on millions of protesters has drawn criticism from a number of UN organisations, who claim that military activities in the country led to a number of war crimes.

Seasoned journalist and regional analyst Bertil Lintner on Monday said that China wants instability in Myanmar and intends to continue being a significant controlling force in the affairs of the Southeast Asian nation.Wang Yi, the foreign minister of China, came in Myanmar on Saturday for a conference that the opposition claims is an affront to ongoing peace efforts. Wang Yi's goal for his first trip since the military took over is to protect Beijing's long-term interests.

Rights organisations claim that following the coup launched by the Myanmar military on February 1, 2021, the country's general human rights situation has gotten worse. Since the military took over, a widespread crackdown on millions of protesters has drawn criticism from a number of UN organisations, who claim that military activities in the country led to a number of war crimes.

Lintner told ANI that China is undoubtedly playing a role in Myanmar, but he wouldn't describe it as "helpful" in response to a query on what role China will be seeking to play in light of the ongoing instability in the nation. He contends that while the Chinese are playing games on various levels, they are also at ease with the military in charge.

“China is certainly playing a role in Myanmar, but I wouldn’t call it constructive….the Chinese feel comfortable with having the military in power, but they are also playing games on different levels, for instance by supporting the United Wa State Army which, in turn, sends Chinese-made weapons to Kokang, Shan and Palaung rebel armies,” he said.

“It’s often argued that the Chinese are interested in stability and abhor chaos. It may be true that they don’t want chaos, but a certain degree of instability, and then instability which they control, serves their long-term interests: to be a major, controlling player in Myanmar politics,” he added.

Southeast region specialists think that China's primary interest in Myanmar is geostrategic in post-coup Myanmar. It is not in India's interest to witness the formation of a Chinese client state on its eastern border, Lintner added, noting that Pakistan occupies enough of the country's western border.

India, which has a roughly 1,700-kilometer border with Myanmar, has already highlighted the necessity of Myanmar's restoration to democracy as soon as possible.

The need to put a halt to any violence and maintain peace and stability in the border regions was emphasised by the then-Indian Foreign Secretary Harsh Vardhan Shringla during his visit in December of last year.

“Any developments in that country have a direct impact on India’s bordering regions. Peace and stability in Myanmar remain of utmost importance to India, specifically to its North Eastern Region,” he had said.

Lintner emphasised that it is in New Delhi's best interests for India to take a more active role in Myanmar.

He emphasised that Myanmar serves as India's entry point to Southeast Asian markets and that rebel groups that engage in cross-border insurgencies have safe havens on the Myanmar side of the border, from which they occasionally undertake raids into India.

"Having a Chinese client state on its eastern border is not in India's best interests, and India needs energy. A free and stable Myanmar might offer India hydroelectric power and gas," he said.