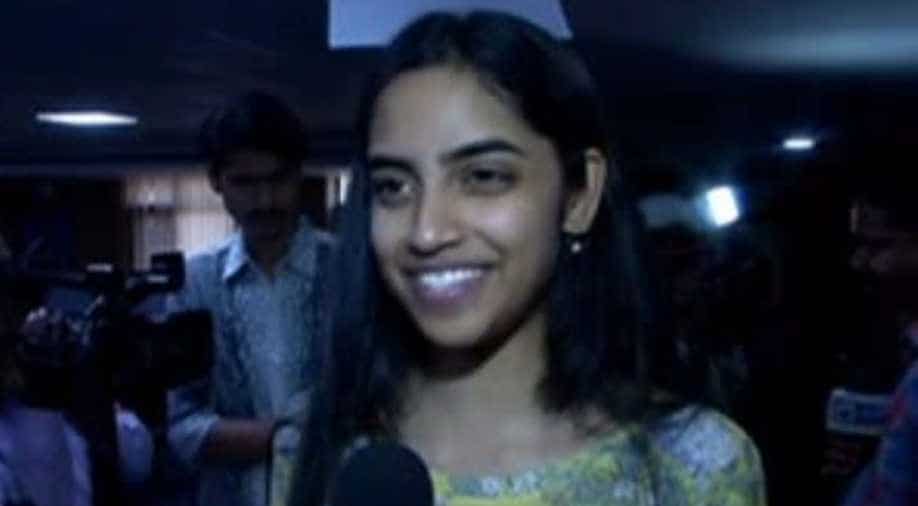 Raksha Gopal said she did not expect to top. Photograph:( ANI )

The second and third positions were bagged by Chandigarh students Bhumi Sawant and Aditya Jain who scored 99.4% and 99.2% ||Raksha Gopal, a student of Amity International School, said her aim was not to be a topper, but to secure good marks

India's Central Board of Secondary Education (CBSE) Sunday announced the results of Class XII examination with Noida girl Raksha Gopal scoring a whopping 99.6 per cent to bag the first rank.

Students can check their results on the official website of the board, cbseresults.nic.in.

A student of the Amity International School in the Delhi suburb, Raksha shared that it was not her aim to be a topper, but to secure good marks.

The second and third positions were bagged by Chandigarh students Bhumi Sawant and Aditya Jain who scored 99.4 per cent and 99.2 per cent.

Federal HRD Minister Prakash Javadekar spoke to the toppers and congratulated them for their performance.

A jubilant and excited Raksha told ANI, "My aim was not getting the top grade, but to do well. My strategy was to focus on all my subjects and solve as many papers as possible and my school helped a lot. The chairperson Amrita Chauhan and the principal Mrs Renu Singh, including all the teachers they planned out strategies, they gave us papers. The helped me in clearing all the doubts I had. So there was no special strategy as such."

She also noted that IAS will be an option for her, but right now she just wants to get into college.

Raksha's parents, who were beaming with pride at their daughter's performance, said it was important for them to counsel her from time-to-time so that she was kept away from any kind of pressure.

"It was important to sit with her and talk to her so that she would not get tense. She always enjoyed her studies and would take adequate breaks to read and play the keyboard. We stood by her to support her, but she completely was guided by the school teachers and followed their instructions to the word," her father, Gopal Srinivasan told ANI.

An overwhelmed Ranjani Gopal, Raksha's mother said Raksha was a diligent student who never postponed her studies till the last minute.

"Undoubtedly, the CBSE syllabus is large. But we always told her to stay calm and she made sure she got a good sleep every day. She would always plan her studies well so she had enough time to relax," she said, adding that she is under no pressure to decide her future course of action.

Raksha's elder sister Prerna said Raksha was her role model, adding that one should learn from the hard work and determination she put into achieving this.

"Today, my sister is my role model. Goes to show where hard work can take a person. The kind of dedication Raksha showed is commendable. She should enjoy the limelight while it lasts!", said Prerna with a chuckle.

The overall pass percentage this year is 82 per cent, as against last year's 83 per cent. Around 11 lakh students have appeared for the CBSE Class 12 exam which is conducted in all schools of the board across India.

The result has been announced after much delay due to the controversy with the Marks Moderation Policy.