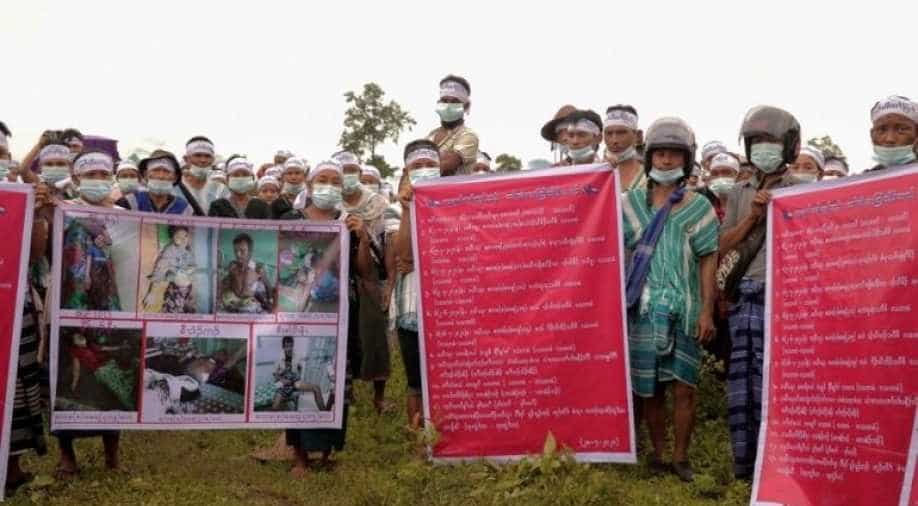 Karen ethnic people hold posters and shout slogans during a protest against Myanmar Army for the allegedly arbitrary killings, raping, shelling and for the removal of the army camps, at Hpapun in Kayin State on July 28, 2020. Photograph:( AFP )

United Nations human rights chief on Monday said that “no concrete measures” have been taken three years after the Rohingya exodus to provide relief to the people. Additionally, Michelle Bachelet said that many civilian casualties may represent war crimes.

"In some cases, they appear to have been targeted or attacked indiscriminately, which may constitute further war crimes or even crimes against humanity," Michelle Bachelet, UN High Commissioner for Human Rights told the Human Rights Council in Geneva. She was speaking about casualties in Rakhine and Chin States.

Citing satellite images and eyewitness accounts, she noted how areas of northern Rakhine had been burnt in the recent months, calling this “troubling”, while calling for an independent investigation.

Myanmar is in election mode and campaigning has begun. Political rallies are being held and with the election season underway there is also a controversy involving the Myanmar army. The army holds considerable power over the political establishment in the country and has often been accused of human rights violations.

A new report shows how the army is running a global business empire to finance its atrocities. The report is part of an investigation by Amnesty International. It is based on leaked government documents which apparently expose how international companies have been indirectly financing the Myanmar army.

According to the report, MEHL establishes joint ventures with business partners across Myanmar. This includes business activities like mining, manufacturing and trade.