Cashless but not moneyless 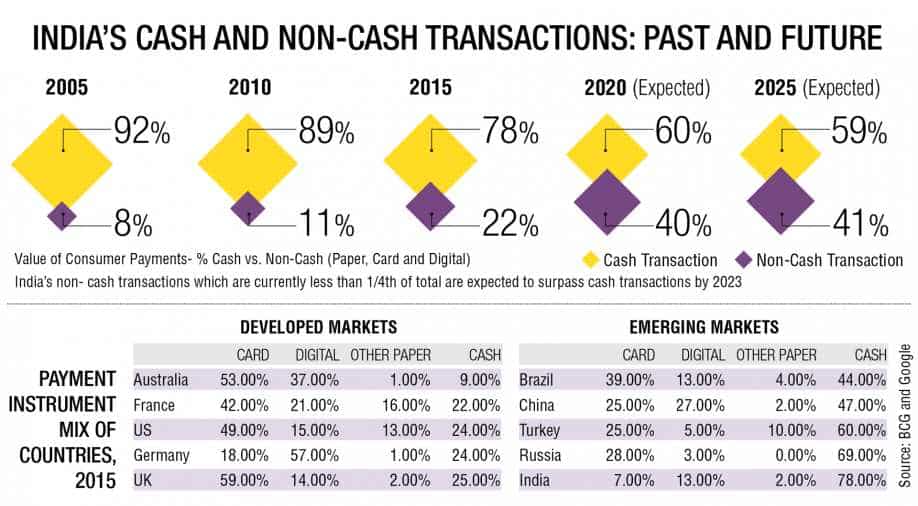 India's cash and non-cash transaction: past and present Photograph:( DNA )

Björn Ulvaeus led Sweden’s cashless revolution. When it comes to talking about a cashless economy, the name of Sweden tops the charts. It is an interesting story as to how Sweden turned into a cashless economy. Björn’s son’s Stockholm apartment was burgled twice in 2008. The incident set him thinking that if Sweden were a cashless society, then the robbers won’t be able to sell what they stole.

By 2011, Sweden’s society was completely revolutionised. Bills and coins made up just 2 per cent of Sweden’s economy. Only 20 per cent of transactions in Sweden were taking place in cash compared to 75 per cent in rest of the world.

Where did it all begin?

Theft may have been the reason to inspire a citizen of Sweden to revolutionise the country into a cashless economy, India has several of its own issues that should motivate its government and the citizens to take concerted steps to move towards a cashless economy.

Corruption leading to a mammoth black economy is eating away the Indian economy from within every day. But an important question to ask at this point is that how did we reach here? How did it all begin?

At the time of independence, the Indian economy adopted a mixed economy model with the government having significant control over the private sector. To start any industry or to even slightly change a product, an individual needed to take a license or seek permission of the government i.e. the infamous bureaucrat.

It may have been a good policy for a newly independent young nation where every sector and individual needed the guidance of its elected representatives. However, this guidance was stretched too far, so much that it started suffocating its own citizens. The laws became so overbearing that during the regime of Indira Gandhi 1973-74, India’s personal income tax had eleven tax brackets with highest marginal income tax rate of 97.5 per cent. And god forbid, if one’s income was in the range of Rs. 10 lakh to Rs. 10.3 lakh, then the maximum marginal rate of tax was 103 per cent.

Thus, people started finding ways to circumvent their own laws. Bribing the bureaucrats to get a license to start an industry became a common practice. It became the habit of people to find loopholes in the laws to avoid taxes. Even with Indian economy going under several positive transitions over the years, this habit has not changed and we have created a black economy that accounts for almost 23.7 per cent of India's GDP. According to the government data, only 3.8 per cent of Indian’s pay taxes.  Changing people’s behaviour is another huge challenge that the government is facing.

Corruption may have given birth to a black economy in India but now this parallel economy has taken a life of its own. It is plaguing every sector of the economy. It is the in the higher education sector in the form of paid seats, in the real estate sector, in trade in the form of misinvoicing, political campaigns, small businesses largely running on unaccounted cash etc.

Where do we stand now?

What many Indians do not understand is that the black economy may be benefitting them in the short-term but in the long run, it serves no good. When one pays for his/her home in cash, one is contributing significantly in inflating the prices in the housing sector. One is fooled into thinking that the prices are rising. What is really happening is that the cash economy which has been flooding the real estate is going to make a killing. The plan is so subversive that even somebody who only has white money is made to change into black and in the process making the real estate’s mafia’s black money into white. It is like a Ponzi scheme, just that people don’t realise that they are being sucked into it.

The cash economy further deepens corruption. Only if there is cash floating around can one give away unaccounted cash for bribery or other illicit activities.

Don’t get lost in the present mess

After the government’s announcement on November 8th to recall 500 and 1000 rupee denomination notes, there has been serious liquidity crunch in the economy as these notes constituted almost 86 per cent of the circulation.

As a result, there have been long waiting lines to exchange money, causing inconvenience to the citizens of the country. However, the challenge that the economy is looking at in the face of black money, this is a small price to pay.

The challenge is so strong that it would have been impossible to make any significant change by taking baby steps. Somebody said that by making small changes in how a candle works would not have led to the discovery of electricity and then a bulb. It required a completely revolutionary and out of the box thinking. Similarly, only a dramatic change like the current one can put India’s name on the list of one of the least corrupt countries in the world.