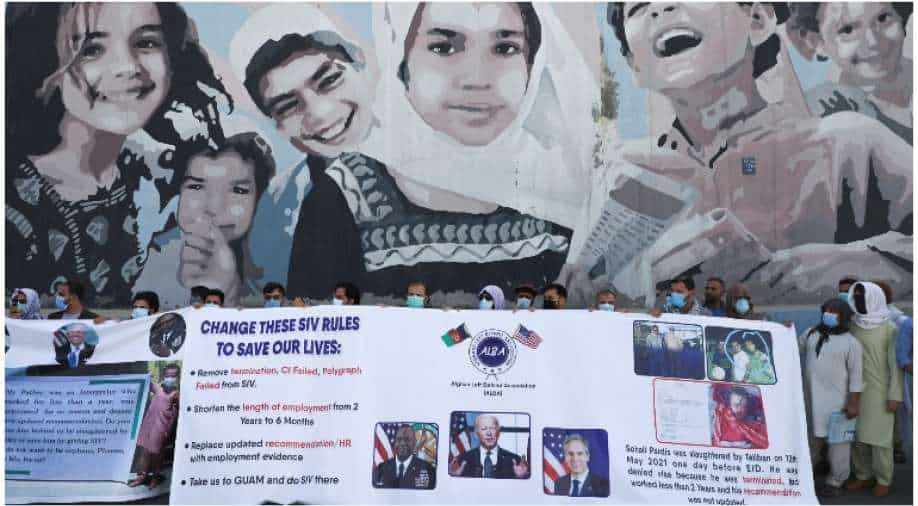 FILE PHOTO: Former Afghan interpreters, who worked with U.S. troops in Afghanistan, hold signs during a demonstration about their safety, in front of the U.S. embassy in Kabul June 25, 2021. Photograph:( Reuters )

Taliban are gaining Afghan territory by the day. Afghans who worked for the coalition fear reprisals from the Taliban

Canada said on Friday that it would resettle Afghan interpreters, embassy stayy and their families as situation in Afghanistan was "dynamic and deteriorating".

"Canada is here to support those who supported us," said Immigration Minister Marco Mendicino, adding that "several thousand" people would be eligible and the first arrivals would be landing in Canada very shortly.

"We appreciate that there is a need to act quickly and decisively but that we must also do so safely given the very dynamic and deteriorating situation," Mendicino told a televised news conference in Ottawa.

He did not give a specific number of people who would be admitted or say when exactly they would arrive.

"Many Afghan citizens put themselves at risk to assist Canada ... now they face even greater threats from the Taliban," he said.

As Taliban advanse, their is fear among Afghans who worked for the international coalition. They fear that there will be reprisal from the Taliban.

Canadian officials are identifying eligible Afghans, focusing on those who worked for Canada as interpreters or who provided "critical support," embassy staff and their families, Mendicino said.

Canada's combat mission in Afghanistan ended a decade ago, after which the country resettled about 800 Afghans who had worked for the country as interpreters or in other roles.

"The pace of the Taliban's advances over the course of the past month is troubling," Foreign Minister Marc Garneau told the news conference.