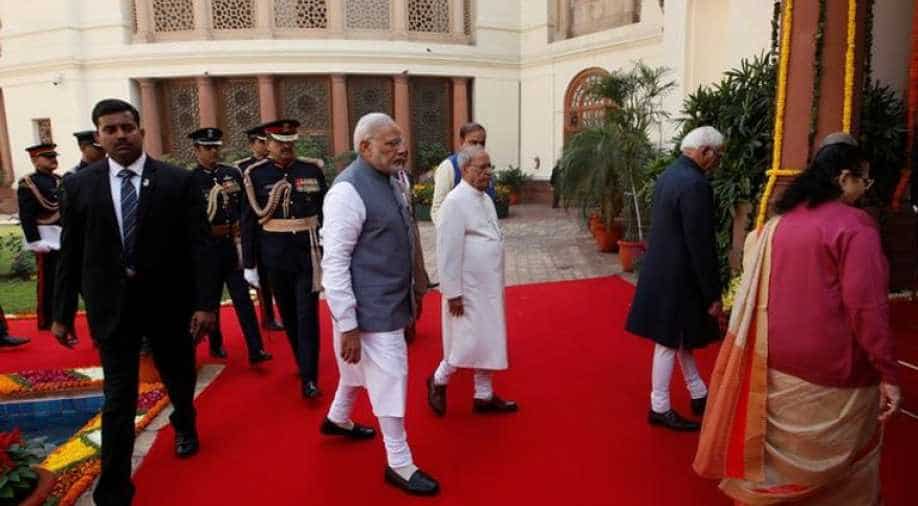 Narendra Modi (L) and Pranab Mukherjee (R) arrive at the Parliament premises. Some 34 bills will also be introduced for passing and consideration in the Parliament. Photograph:( Reuters )

Indian President Pranab Mukherjee kickstarted Budget 2017 by addressing a joint session of both the Houses of Parliament on Tuesday.

The President advocated for a constructive debate on simultaneous elections in the Lower House (Lok Sabha) and Assemblies, as well as funding of polls to eliminate money power.

"My government welcomes a constructive debate on simultaneous conduct of elections to Lok Sabha and state legislative assemblies. Funding of elections to eradicate misuse of money power also needs to be debated," he said.

In his speech, he praised people, especially the poor for showing ''resilience" in the fight against black money and corruption.

He also listed various achievements of the government saying all initiatives target the welfare of the 'gareeb', 'peedit', 'Dalit' and 'vanchhit' (the poor, discriminated and deprived section).

The President assured that the government is committed to fulfilling the "social and economic quality" for the deprived sections of society.

"Under Deen Dayal Antyodaya Yojana, over Rs 16000 crore have been made available to SHGs in the current Financial Year," President Mukherjee said.

"Under Deen Dayal Upadhayay Gram Jyoti Yojana over 11,000 villages have been electrified in a record time," he said.

The President said the government will combat terrorism and ensure that the perpetrators do not go unpunished. He praised the government's decision to carry out surgical strikes against militant launch pads along the Line of Control as a fitting reply to the repeated incursions. He said the country was proud and "owed a debt of gratitude" to the soldiers for their bravery.

The Economic Survey will be tabled later in the day while the Rail and General Budget will be presented together on Wednesday, a departure from tradition.

Some 34 bills will also be introduced for passing and consideration. These include three ordinances which will be replaced through bills: The ordinance of Enemy Property, Payment of Wages and Specified Bank Notes.