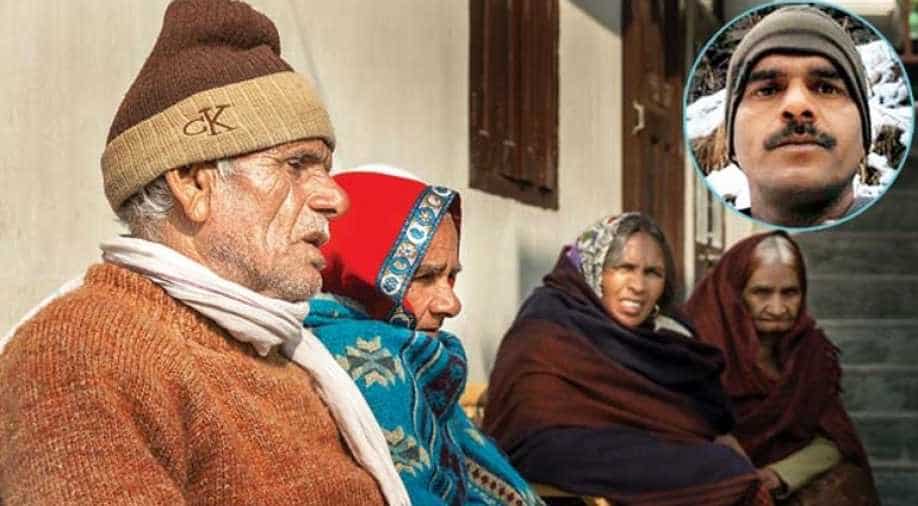 Yadav has been hounded by his employer the Border Security Force ever since he uploaded a video on Facebook. The video said the food the soldiers were given to eat was bad. Photograph:( DNA )

Serving the nation selflessly was a dream for Rohit Yadav. But disgusted with the way the Border Security Force (BSF) has hounded his father Tej Bahadur after he released a video alleging bad quality rations, this 17-year-old does not want to have anything to do with the armed forces.

"It is an open secret. The food the soldiers get is unpalatable, yet they endure it for the love of the nation. Look at what has the same love brought my father: disrepute and baseless allegations," says an emotional Rohit. His focus is now on cracking his IIT exams, for which he travels everyday to Gurgaon for coaching. One could easily dismiss Rohit's decision as just one of the many sons of a soldier who has chosen not to follow the family path. But the Yadav family is just not any family. Its forefathers can be traced back as soldiers to the 1857 Mutiny and the Independence struggle. Indeed, before the video, serving the nation was an automatic choice. But now everything has changed.

The only sin my son has committed is to have a voice of his own. He has been awarded 14 medals by the BSF. Why would they decorate a soldier who they say is an 'alcoholic' and a 'habitual offender'?' says Tej Bahadur's father

Twenty-one-year-old Omvir Yadav, Tej Bahadur's nephew — whose father is also in the BSF — is also one of the family who has now changed his mind. Earlier, Omvir would wait for Bahadur to come for leave as he would make him and his cousin Rohit do fitness exercises.

"Whenever I spoke to my uncle (Tej Bahadur), he always persuaded me to join the forces, but now I know I don't want to do this anymore. He spoke about bad food and conditions there and the BSF questioned his service record and character. We cannot stand for that," said Yadav.

The boys' decision is backed by their grandmother Nihal Kaur, Tej Bahadur's mother. "My grandsons would fondly talk about joining the Army and other paramilitary forces, but today, irrespective of how motivated they are, I will never send anyone from the family to their family," she says emotionlessly. "Earlier, I use to tell the world about my son's achievements but I keep silent now."

The fact that the family would consider leaving the forces is a joke not just for them but for everyone involved. Sher Singh, Tej Bahadur's father, recounts their history with the forces. Singh is visibly and rightly proud of the family's lineage that has rubbed shoulders with the likes of Mahatma Gandhi and Netaji Subhas Chandra Bose.

"My father went to jail with Netaji and even (former President) Giani Zail Singh in his autobiography has mentioned his name as his political guru. Our entire family has a legacy and that is how I have brought up my children," a visibly ill and angry Singh recounts. Rubbishing the BSF's charges against his son, he adds: "My father was an integral part of the freedom movement. His efforts were lauded by Bose's brother who even gave him the moniker of 'Azad'. Betrayal of our motherland is not in our blood. It's only sheer nationalism and patriotism that runs in our genes."

Sharmila Yadav, Tej Bahadur's wife, seconds her father-in-law's claims but admits that she is worried about her husband. "He used to call everyday but from the time the video was uploaded. We have only spoken twice or thrice, that too from different numbers. His phone is also switched off," says a worried Sarita.

Vouching for the impeccable integrity and professional commitment of her husband, her anger against the BSF knows no bounds. "They are declaring him mentally unfit because he blew the lid off their corrupt practices. If that's the case, why have they posted him on the Line of Control (LoC) and that too armed with a weapon? He will fight this even after his retirement as he has proof against them."

Singh seconds his daughter-in-law's opinion. "The only sin my son has committed is to have a voice of his own. He has been awarded 14 medals by the BSF. Why would they decorate a soldier who they say is an 'alcoholic' and a 'habitual offender'?"