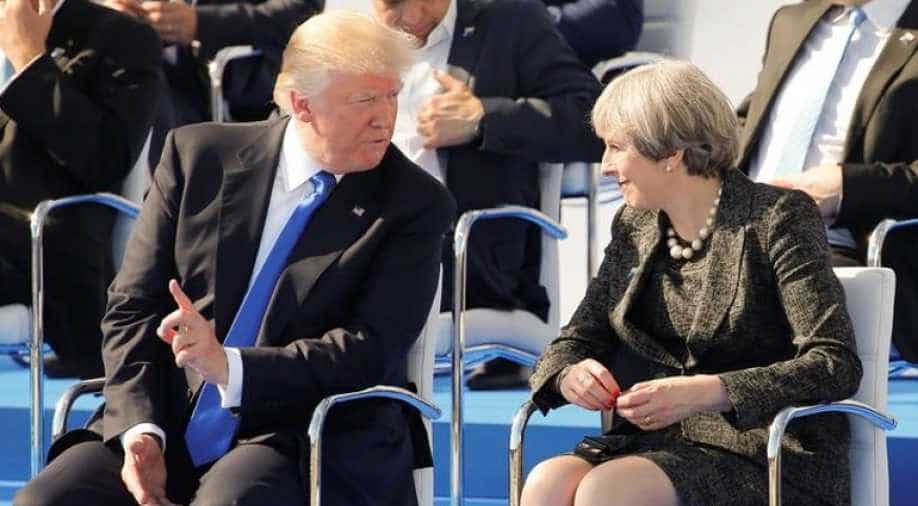 US President Trump and British PM Theresa May attend a ceremony at the start of the NATO summit in Brussels on May 25. Photograph:( AFP )

British Prime Minister Theresa May raised her concerns about intelligence leaks over the Manchester attacks with US President Donald Trump at the NATO summit Thursday, her spokesman said.

"The prime minister raised the issue of the intelligence leaks with the president while they were waiting for the family photograph to be taken," May's spokesman said.

"She expressed the view that the intelligence sharing relationship we have with the US is hugely important and valuable, but that the information that we share should be kept secure."

Will prosecute those responsible for intelligence leaks: Trump

Donald Trump described US intelligence leaks over the Manchester bombing as "deeply troubling" and threatened to prosecute those responsible, after an earlier warning by British Prime Minister Theresa May to keep shared data "secure".

Arriving in Brussels, May warned that intelligence sharing with the United States was "built on trust".

"Part of that is knowing intelligence can be shared confidently and I will make clear to President Trump that intelligence shared with law enforcement agencies must be secure," she told reporters.

In a statement issued by the White House, as Trump joined May at a meeting of NATO allies, he said: "There is no relationship we cherish more than the special relationship between the United States and the United Kingdom."

The British government has expressed its anger at the release in US media of details from the investigation into Monday's concert attack, including photographs of parts of the bomb which left 22 people dead, including children.

Visiting the military alliance's new $1.2 billion headquarters with fellow leaders later, Trump led a moment's silence for the victims of what he described as "a barbaric and vicious attack on our civilisation".

In his statement, Trump -- who was already struggling domestically to stem a tide of damaging leaks from law enforcement agencies -- said the information coming out in the US media was "deeply troubling".

"These leaks have been going on for a long time and my administration will get to the bottom of this. The leaks of sensitive information pose a grave threat to our national security," he said.

"I am asking the Department of Justice and other relevant agencies to launch a complete review of this matter, and if appropriate, the culprit should be prosecuted to the fullest extent of the law."

The US President berated NATO allies for not doing enough on terrorism and spending, while stopping short of the public commitment to collective defence they had hoped for.

Trump said the Manchester bombing, claimed by the Islamic State group, showed that "terrorism must be stopped in its tracks."

"The NATO of the future must include a great focus on terrorism and immigration as well as threats from Russia and NATO's eastern and southern borders," the president said.

Trump denounced allies for not paying their fair share, saying that even if they met a commitment to allocate two percent of GDP to defence, it would still not be enough to meet the challenges.

"Twenty-three of the 28 member nations are still not paying what they should be paying and what they're supposed to be paying for their defence," the president said.

"This is not fair to the people and taxpayers of the United States. Many of these nations owe massive amounts of money from past years," repeating a charge he had raised constantly on the campaign trail.

German Chancellor Angela Merkel struck an entirely different note as she unveiled a memorial made up of a section of the Berlin Wall to mark the end of the Cold War.

"Germany will not forget the contribution NATO made in order to reunify our country. This is why we will indeed make our contribution to security and solidarity in the common alliance," she said.

The surprising mention of immigration was in line with one of Trump's key election promises to build a wall to keep out immigrants crossing into the United States from Mexico, a plan widely derided in Europe.

Trump's harsh words came despite NATO saying it would formally endorse joining the US-led coalition against IS at the summit, in the face of reservations in France and Germany about getting involved in another conflict.

His carefully choreographed visits to the EU and NATO in Brussels had been designed to heal divisions caused by the billionaire's harsh campaign criticisms of both institutions on the campaign trail.

He called NATO "obsolete" and praised Britain's Brexit vote to leave the EU.

But differences immediately emerged after his talks with the European Union's top officials Donald Tusk and Jean-Claude Juncker on climate change, trade, and above all Russia.

"I'm not 100 per cent sure that we can say today -- 'we' means Mr President and myself -- that we have a common position, common opinion about Russia," former Polish prime minister Tusk said.

Trump on the campaign trail made restoring relations with Russia a key promise but he has faced bitter opposition in Washington and has since become embroiled in a scandal over alleged links to Moscow.

Trump came to Brussels direct from a meeting with Pope Francis at the Vatican, after visiting Saudi Arabia, Israel and the Palestinian Territories.

On his arrival on Wednesday in Brussels, the city he once said had been turned into a "hellhole" by Muslim immigration, the president was greeted by around 9,000 protesters saying "Trump not welcome."