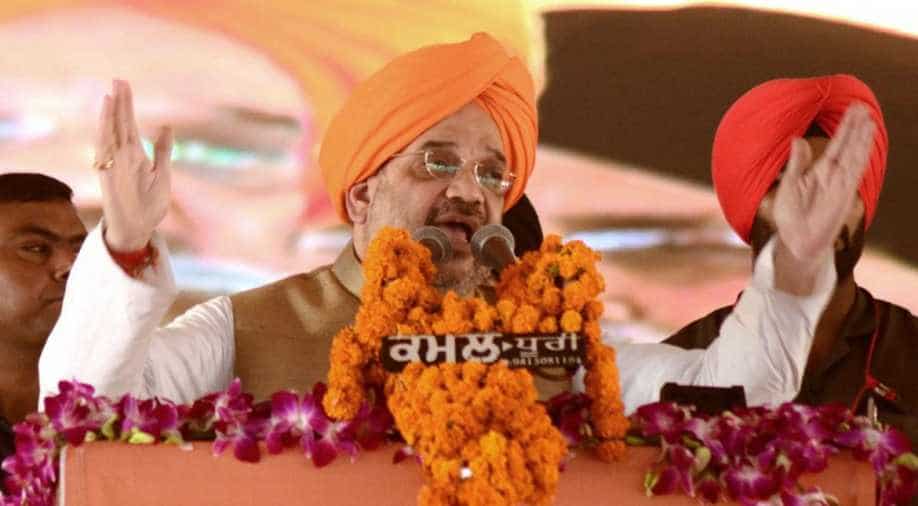 "Efforts will be made to ensure that Ram temple is constructed under constitutional provisions," Amit Shah declared while releasing the BJP manifesto. This means BJP is back to propagating the hindutva agenda even as it tries to push the development card in the elections. The Ram temple is sure to be seized upon by the SP-Congress coalition and also the BSP, possibly at the cost of other major issues.

Bahujan Samaj Party chief Mayawati (BSP) reacted sharply almost immediately at BJP's Ram temple promise, declaring "the BJP is trying to mislead the people of Uttar Pradesh". Political parties across Uttar Pradesh will now try to checkmate the BJP on its Ram temple agenda at a crucial stage in the campaign, ahead of the first phase of voting on 11th February.

The BJP has named the manifesto as  'Lok Kalyan Sankalp Patra' (pledge for people's welfare) for the Uttar Pradesh assembly elections.

"BIMARU' (Bihar, Madhya Pradesh, Rajasthan, UP) states have improved, but not Uttar Pradesh. Centre sanctioned Rs one lakh crore to Uttar Pradesh but no development has occurred, in fact, the law and order is at a new low," the BJP president added as he released the manifesto.

The document focuses on farmers' welfare, Amit Shah said, adding agricultural loans will be waived once BJP comes to power. "We will provide laptops to all students without any discrimination and provide free WI-Fi to all colleges and universities," he asserted. The BJP president also said special focus would be given to Bundelkhand for its all round development.

Special Task Force to be set up to put an end to illegal mining in the state, Shah stated.

The BJP in its manifesto has stated that there would no interviews for Class III and IV Uttar Pradesh government jobs to end corruption in recruitment and the party will form teams at district levels to check "exodus" of people due to communal tension.

The party has also promised to set up food processing parks and ensure uninterrupted power at cheaper rates for the poor.

* Rs 500 crore will be allocated for the Baba Ambedkar
fund.

*All colleges and universities will have free Wi-Fi.

*Up to 6 lakh loan from permanent houses and toilets. BPL citizens to get 2 lakh life cover.

*24x7 electricity in all houses. PM has said before 2019, all villages will have electricity.

*Villages will be connected with mini-bus services. People will be able to use metro at any time with their families.

*There will be a Bundelkhand and Poorvanchal development board under the directed supervision of the chief minister's office.

*Redressal system in every district to sort our trader disputes.

*The opinion of all women on triple talaq will be taken and placed in front of the Supreme Court.