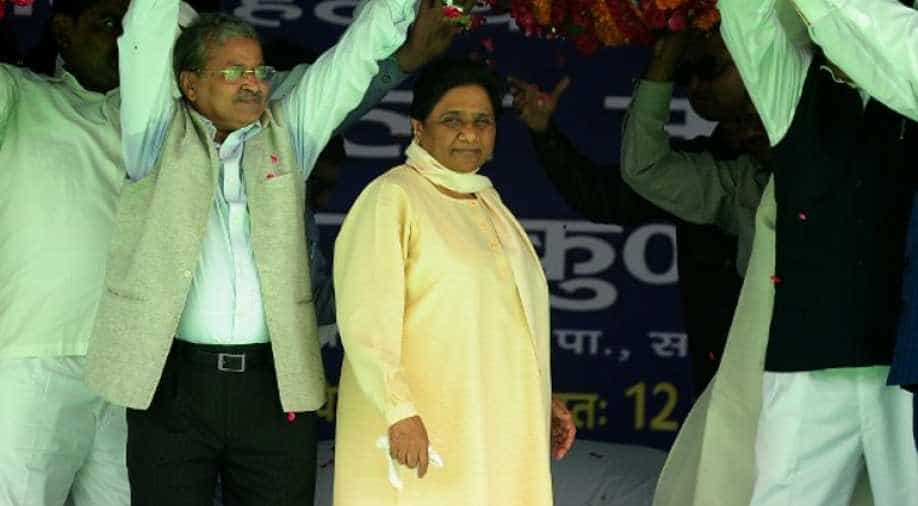 Launching a counter-attack against the Bahujan Samaj Party (BSP) supremo Mayawati, the Bharatiya Janata Party (BJP) today asked her if the huge amount of money deposited in her party's bank account was a money conversion exercise as it accused her of using her Dalit identity to hide "corruption".

The BJP fielded Law Minister Ravi Shankar Prasad to attack Mayawati, and hurled other charges at them.

"Her allegations are baseless and we reject it with the contempt they deserve. If the Enforcement Directorate (ED) does a routine exercise, why is she so rattled? Will your corruption be hidden in the name of Dalits. Does Mayawati want to say that her corruption should be seen as a fight against Dalits? It is an insult of Dalits," he told a press conference.

Noting that she did not deny the deposits in the BSP's account, he asked, "It raises a bigger question. Is it a donation or money conversion exercise?"

The development of Dalits cannot be "mortgaged" to corruption, he said.

Prasad also made light of her claim that Rs 104 crore found in BSP's bank account in Delhi had come by way of political donations and that those were converted into high denomination notes before being deposited after the note ban kicked in on November 8.

"Small currencies were converted into bigger bills and the money was not deposited in August, September and October but soon after demonetisation. It also raised a lot of suspicion. Now we are getting signals of why she has been opposing the note ban so strongly from the first day," Prasad said.

He also rejected her claim that the ED's action was linked to her assertion that the BJP was pushing Samajwadi Party (SP) and Congress for an alliance for the Uttar Pradesh (UP) assembly polls.

"This is nothing but her frustration. She made these comments only yesterday while deposits were made much earlier...As far as BJP is concerned, even if SP, BSP and Congress come together, it will emerge victorious," he said.

When asked about her demand that BJP too make public the donations it has received, he said all parties submit these details to the Election Commission which puts it on its website.

On the government's stand on electoral reforms, he said those were primarily the Election Commission's job but it was open to supporting "positive reforms".

"As far as improvement is concerned we are certainly open to that. There has to be proper initiative and consensus," he said.

When asked about Mayawati's assertion that the ED action would help her in the Uttar Pradesh state elections the same way as the alleged Taj corridor corruption case started under the NDA I in 2007, Prasad said, She had forgotten that there were Lok Sabha elections in 2014 and what happened to her party then.