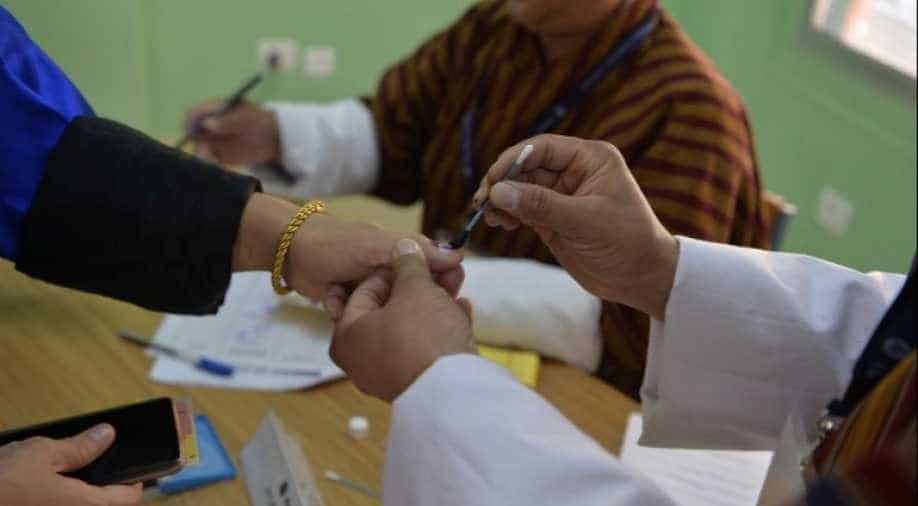 Results of the runoff vote -- to be announced Friday -- could see a government formed by a party only registered in 2013.

The Himalayan kingdom of Bhutan, wedged between India and China, voted in a national election Thursday guaranteed to usher in a new ruling party which must boost the economy without compromising the country's fierce independent streak.

The country of 800,000 people, famed for its Gross National Happiness index, is holding only its third democratic election since the ending of the absolute monarchy in 2008.

The capital's streets were mainly empty as authorities declared a holiday for the election. Many voters looked forward to seeing a new government tackling problems including Bhutan's large foreign debt, mainly owed to India.

"We expect a new broom to sweep well," said engineer Gopal Chettri after voting in the capital Thimphu. "It is a country with a limited budget so what can you say. Whatever party wins has to cope with it."

Results of the runoff vote -- to be announced Friday -- could see a government formed by a party only registered in 2013.

Druk Nyamrup Tshogpa (DNT) narrowly led the first round of voting on September 15 with 92,722 votes, just ahead of the Druk Phuensum Tshogpa (DPT), which won Bhutan's first election in 2008, on 90,020.

The rivals have vowed to bolster the economy and health system and improve government transparency. Corruption, rural poverty, youth unemployment and criminal gangs are all problems for the "Land of the Thunder Dragon."

The key will be making money from the country's hydro-electric power, which is mainly exported to India. The DPT wants more hydro-power construction while the DNT is more wary of increasing Bhutan's foreign debt.

Hydropower financing -- which comes to more than $1.5 billion -- accounts for more than 80 per cent of Bhutan's foreign debt. Most is owed to India, which has financed four out of five of the kingdom's new hydro-electric projects.

Bhutan has tried to shield itself from the downsides of globalisation, striving for "Gross National Happiness" over GDP growth, maintaining a carbon-negative economy and keeping tourist numbers down with a daily fee of $250 per visitor in high season.

While Bhutan is proud of its cultural and political independence and has diplomatic relations with barely 50 countries, it knows it will have to open up.

Foreign policy is kept out of the election campaign however even though during the 2013 campaign -- fearing that Bhutan was moving too close to China -- India withdrew subsidies for kerosene and cooking gas imports, in what was seen as an attempt to coerce a change of government.

Relations with India remain sensitive. At least five candidates and activists were fined up to two month's wages for sending instant messenger statements to groups on relations with India, the Bhutan election commission said.

Last year India and China became embroiled in a military standoff over the Doklam plateau claimed by China and Bhutan, and which sits on a strategic corner where the three countries meet.

India, which has a military presence in Bhutan, stepped in to prevent Chinese border guards from building a road there.

Even though Bhutan does not have diplomatic ties with China, its giant neighbour is the third biggest source of imported goods and wealthy Chinese tourists are a valuable new source of income.

Many in Bhutan feel the country should rely less on India and give China and others a chance to help boost the economy and create new jobs. "Bhutan should make friends with other countries," said taxi driver Kinzang Dorji.