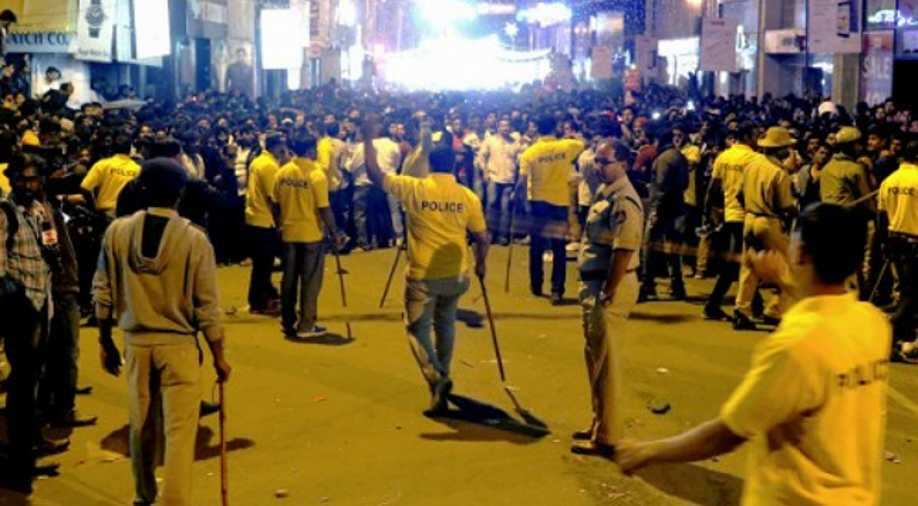 'As promised we have found credible evidence in a case of wrongful confinement, molestation and attempt to rob,' the city's new commissioner of police said in a tweet. Photograph:( AFP )

Three days after New Year eve revelry turned into a nightmare for several women who assaulted by gangs of men, police claimed to have found "credible" evidence of molestation and have registered a First Information Report (FIR).

As the assaults drew widespread outrage, since no action had been forthcoming from the police, Bengaluru's new Commissioner of Police, Praveen Sood, through a series of tweets on Tuesday night, said his team was working on the case silently.

"As promised we have found credible evidence in a case of wrongful confinement, molestation and attempt to rob," Sood said in a tweet.

"We have taken action by registering an FIR. Investigation is in progress. Police is working.... though silently," he said in another tweet.

Stating that enquiry is underway by a deputy commissioner of police,  he has said that they have gone through the feeds from 45 cameras on MG road, and unedited video is available with police.

Eyewitness accounts had suggested that women were molested and groped and lewd remarks were also passed by miscreants late night on December 31 in the posh area even as it was claimed that 1,500 police personnel had been deployed to control the crowds.

Police had earlier said that no one had come forward to file a complaint about the incident.

If any lady lodges a complaint of molestation that took place on December 31 night, the police will not waste even a minute in registering a case and launch a probe, Sood had tweeted on January 2, adding even without a complainant if police finds credible evidence of molestation, a case will be registered suo motu without waiting.

Sood took over as the City Police Commissioner from N S Megharikh, on January 1.