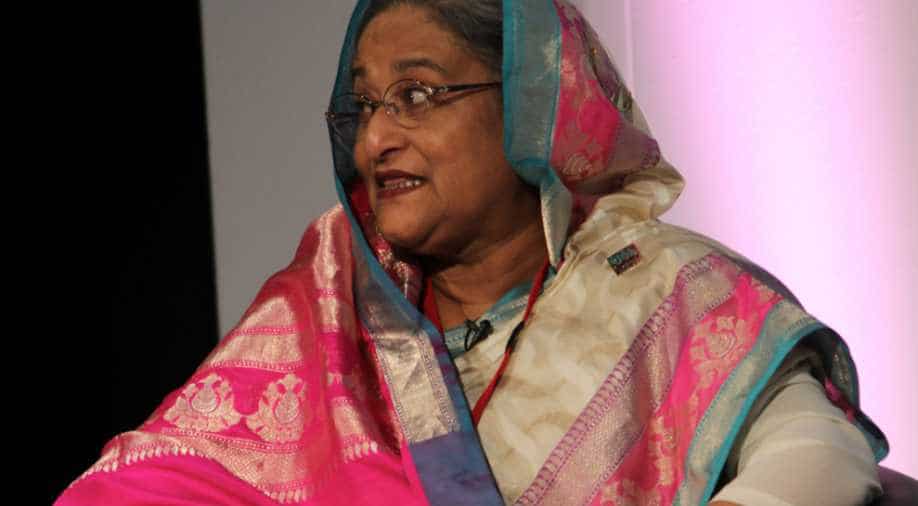 She said that the vested quarter wanted to establish Bangladesh as a dysfunctional state keeping innocent people?hostage. Photograph:(Others)
Follow Us
"Stop killing people in the name of Islam", Bangladesh Prime Minister Sheikh Hasina said today as she vowed to do everything to eliminate terrorists from the country after 20 foreigners were killed in an attack on a cafe in Bangladesh claimed by the Islamic State terror group.

Announcing a two-day state mourning for those killed in the worst terror attack in the country, Hasina asked all, including the general public, to get united to resist a "handful of terrorists".

"Inshaallah (God willing), by eliminating terrorists from their roots, we'll establish Bangladesh as a peaceful state. No conspiracy can hinder our advancement, let's work together, putting behind our all differences, to establish a secure Bangladesh as dreamt by the Father of the Nation," she said in a televised address to the nation.

Hasina said at a time when Bangladesh is trying to establish itself in the world as a self-dignified and self-reliant country, a nexus of local and international conspirators are hatching a conspiracy to hinder this progress.

"Islam is the religion of peace. Stop killing people in the name of Islam; don't blemish it with such incidents," she said.

She said that the vested quarter wanted to establish Bangladesh as a dysfunctional state keeping innocent people hostage.

"They've taken a path of terrorism after having failed to win the hearts of people through the democratic process," the Prime Minister said.

"The peace-loving people of Bangladesh won't allow them to implement their strategy. We'll resist their conspiracy at any cost taking the people of the country with us," she said.

She requested people to keep trust in her government. "We're committed to protecting at any cost the sovereignty of Bangladesh."

She also urged guardians to give proper education to their children and keep watch on them so that they cannot get distracted.

Earlier Hasina said, "They (gunmen) defied the call of Ramzan's tarabi (special evening) prayers and went to kill people.The way they killed people is intolerable. They don't have any religion.Terrorism is their religion."

The Prime Minister said that her "government will do everything to uproot the militants and violent extremists in the country".

"Such barbaric and cowardly attack is unprecedented in the country of communal harmony, Bangladesh," she said.

Twenty foreigners, including an Indian, were killed by the gunmen who stormed the Holey Artisan Bakery in Gulshan diplomatic zone in the capital.

Six attackers were killed on the spot while 13 hostages, including three foreigners, were freed in a joint operation by the armed forces.