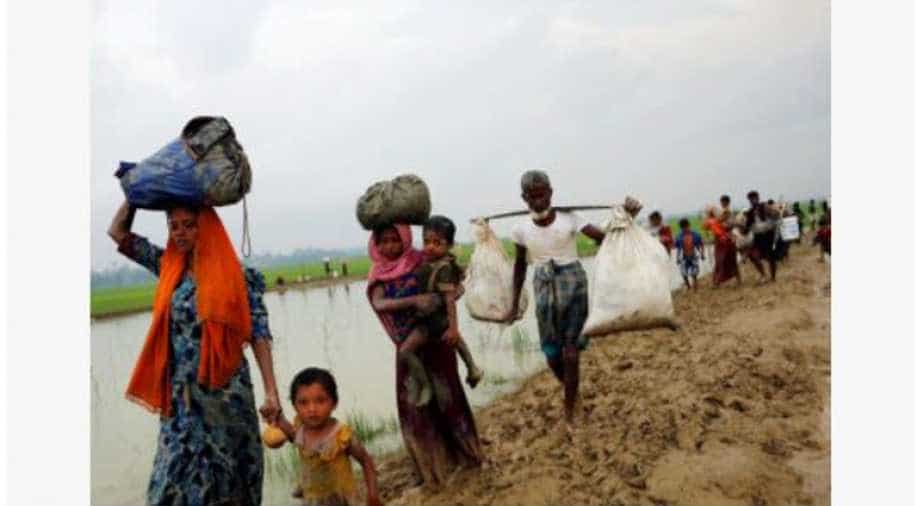 More than half a million Rohingya have fled Myanmar for Bangladesh in the last few weeks. The United Nations has said that what is going on in Myanmar is a 'textbook example of ethnic cleansing'. Photograph:( Reuters )

More than half a million Rohingya have fled to Bangladesh since attacks by militants belonging to the Muslim minority on Myanmar police posts sparked brutal reprisals by security forces.

The refugees accuse Myanmar's army, flanked by mobs of ethnic Rakhine, of slaughtering them and burning their villages in a campaign which the United Nations says amounts to "ethnic cleansing".

Myanmar's military has blamed the unrest on the Rohingya.

Up to 15,000 people joined the demonstrations in Bangladesh's second largest city, police said, organised by hardline Islamist group Hefazat-e-Islam to protest against the killings of the Rohingya.

"We demanded a halt to the genocide of the Rohingya," Hefazat spokesman Azizul Hoque Islamabad told AFP.

"We have also asked the government to train and arm the Rohingya so that they can liberate their homeland," he said.

Communities in Chittagong share close cultural, religious and linguistic ties with the Rohingya, and images on social media purportedly showing abuses against the Muslim minority in mainly Buddhist Myanmar have aroused strong sympathy in Bangladesh.

Islamist parties, including Hefazat, have staged several demonstrations over the issue in recent weeks and some firebrand leaders have called on the government to go to war with Myanmar to liberate Rakhine for the persecuted Rohingya.

The plight of the Rohingya, a Muslim minority who are reviled and denied citizenship in Myanmar, has roused anger across the Islamic world, with protests held in Pakistan, Malaysia and Indonesia.

The influx has also put Bangladesh under immense strain, with the South Asian country already hosting at least 300,000 Rohingya refugees in squalid camps along its border with Myanmar before the latest surge in arrivals.