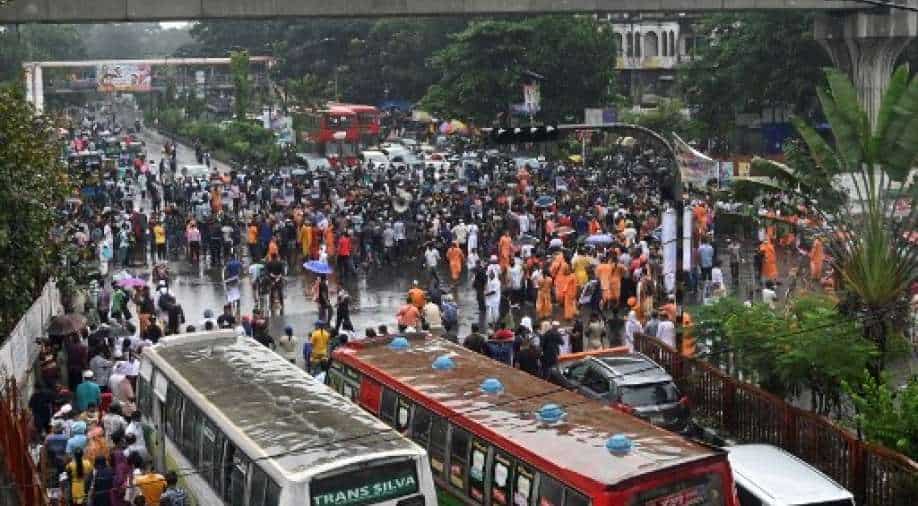 Bangladeshi Hindus protest in Dhaka against fresh religious violence against Hindus in the country Photograph:( AFP )

The CCTV footage showed that on October 13, Iqbal took the Islamic holy book Quran from a mosque and placed it on the knee of a statue of the Hindu god Hanuman in the shrine.

Bangladesh Police have said that they have identified the man behind the ‘blasphemous incident’ in Comilla which triggered nationwide communal violence against Hindus in the past week.

The culprit has been identified as Iqbal Hossain, 35, from Sujanagar area of Comilla city. However, he is yet to be arrested.

According to the Dhaka Tribune, the police were able to zero in on the identity of the accused after analysing the CCTV footage at the venue where the Hindu holy festival of Durga Puja was taking place.

The CCTV footage showed that on October 13, Iqbal took the Islamic holy book Quran from a mosque and placed it on the knee of a statue of the Hindu god Hanuman in the shrine.

He was later seen walking away with the Hindu God’s club in his hand.

Comilla Superintendent of Police (SP) Farooq Ahmed confirmed the identity on Wednesday. Police say Iqbal Hossain is a drifter. It is still unknown whether he has any involvement with any political parties.

Police have filed four cases over the Comilla incident and arrested 41 people till now. Of them, four were Iqbal’s associates.

Amena Begum, Iqbal's mother, claimed that Iqbal was a drug addict and used to torture his family members in various ways.

“He loved to stay at different shrines across the country,” she was quoted as saying.

Amena claimed Iqbal had some psychological issues for the last 10 years as he had been stabbed in the stomach by some neighbours.

According to the Dhaka Tribune, his younger brother Raihan had been helping the police since Friday to find Iqbal.

Iqbal’s family stated that if Iqbal was really guilty, then he should be punished.

Raihan also said that Iqbal might have been provoked by someone or some groups.

Police arrested another person Md Foyez Ahmed, 41, on October 13 and got him on remand to interrogate him. He posted a Facebook live from the festival venue on that day that went viral.

After the video went viral on Facebook earlier this week, mobs of more than 500 people gathered in Cumilla and neighbouring districts over the alleged blasphemy.

About 10 Hindu temples and shrines were attacked and vandalised by the crowds, who threw stones and smashed statues of the Hindu gods.

The anti-Hindu violence continued the following day, where more than 80 special shrines set up for the Durga Puja festival were attacked, with about 150 Hindus injured and two killed.