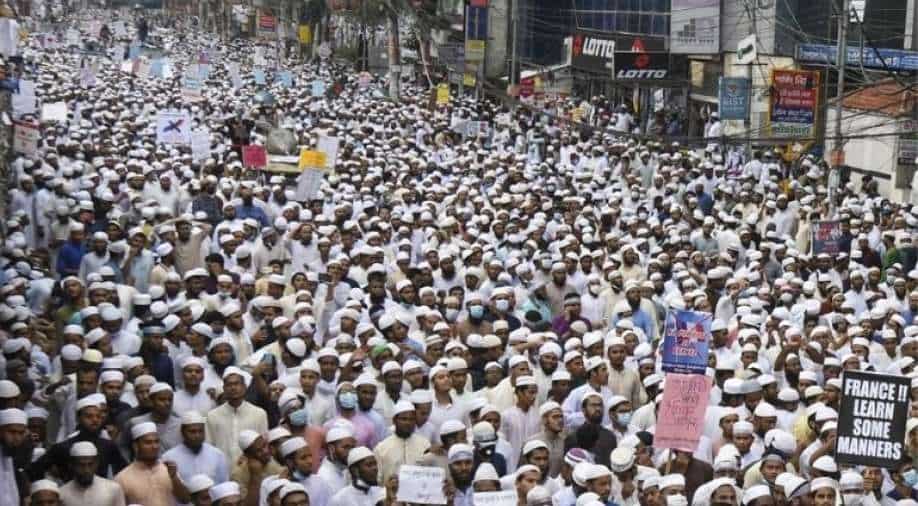 Protesters take part in an anti-France demonstration in Dhaka on November 2, 2020. Photograph:( AFP )

In Bangladesh, at least 50,000 people staged a protest against French President Emmanuel Macron over how he dealt with the publication of Prophet Muhammad’s caricature.

In Bangladesh, at least 50,000 people staged a protest against French President Emmanuel Macron over how he dealt with the publication of Prophet Muhammad’s caricature.

Earlier, Macron had claimed that Islam was “in crisis” all over the world. Muslims around the world claim that Macron’s defence of the cartoon’s publication is insulting to the prophet, prompting global backlash.

Many countries around the world have also moved on to boycotting French products. The rally began in Dhaka, the capital of Bangladesh at a mosque. Before they could reach the French embassy, they were stopped by the security forces.

Last month, a French teacher Samuel patty was murder for showing his class a cartoon of the Prophet Muhammad. Macron had added that it would never renounce the laws that permit blasphemous caricatures in the country.

French products are already being boycotted in some countries in the Middle East.