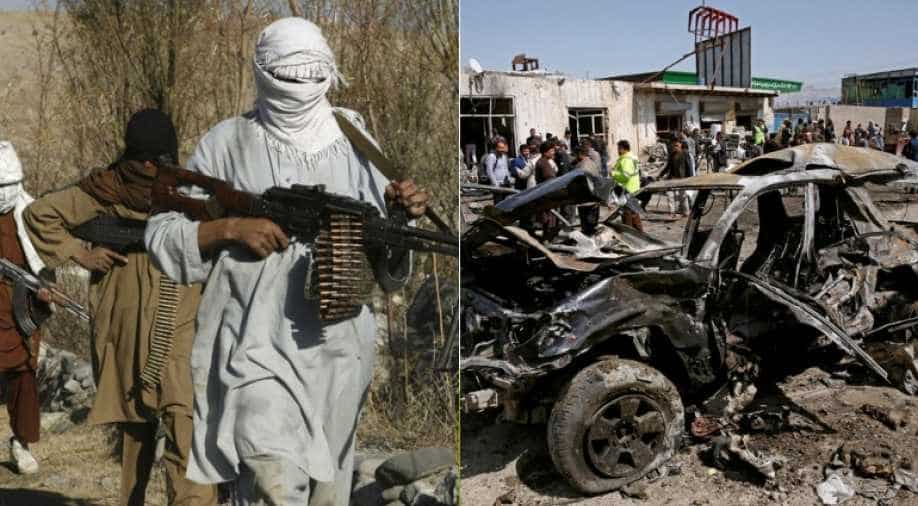 The Taliban are meeting with US negotiators and Afghan representatives in Doha as the US pushes to end its 18-year involvement in Afghanistan, but violence from the insurgents and the US military has continued apace.

The Taliban claimed responsibility for the attack. "Dozens of NDS officers were killed or wounded," spokesman Zabihullah Mujahid in a statement.

Health officials in Ghazni said 13 adults, including eight NDS members, and a child were killed. At least 60 children who were attending classes in a private school situated near the blast site were among the 180 people wounded.

Doors and windows of the school were destroyed in the powerful explosion, the children suffered multiple injuries caused by flying shards of glass and broken pieces of wood.

"The casualty figures may rise as this is not the last report of those injured in the powerful blast," said Zaher Shah Nekmal, a health director in Ghazni province.

The blast in a crowded area of Ghazni city was the latest in a wave of near-daily attacks by the Taliban, who now hold sway over about half of Afghanistan and continue to intensify attacks on Afghan forces despite increased US efforts towards a peace agreement to end the 18-year war.

The attack came hours before Taliban officials were due to begin meeting a group of Afghan delegates in Qatar as part of diplomatic efforts to end years of violence and build trust between Afghan civilians and the militant group.

The Taliban, who have repeatedly refused to negotiate with the Western-backed government of Afghan President Ashraf Ghani, agreed to join the intra-Afghan summit on the condition that those there would attend in a personal capacity.

About 60 high-profile Afghan figures and activists were in Doha to meet the Taliban officials during the two-day conference, a meeting arranged by German and Qatari officials with the support of US negotiators.

Ghani condemned the Taliban bombing in Ghazni on Sunday and questioned their real intent as they hold talks in Qatar.

"They stain their hands with the blood of innocent people in Afghanistan every day. They should know that it is not possible to gain privileges in peace talks by targeting civilians, especially children," he said in a statement.

US and Taliban officials will reconvene on Tuesday.

The warring sides started a seventh round of peace talks last week, which US special envoy for peace in Afghanistan, Zalmay Khalilzad, described on Twitter on Saturday as the most productive session to date.

He said substantive progress had been made on all four parts of a peace deal: counter-terrorism assurances, troop withdrawal, participation in intra-Afghan negotiations, and a permanent and comprehensive ceasefire.

Military conflict and attacks on civilians have intensified even as the diplomatic process gains momentum, triggering tremendous unease among some Afghans about the significance of holding peace talks with the Taliban.

Government officials in the southern provinces of Logar and Helmand said the Afghan forces had conducted several air strikes on Taliban hideouts in the last 36 hours, killing over 30 insurgents.

The Taliban took responsibility for detonating a car bomb at the start of a lengthy gunfight outside a defence ministry compound in the capital, Kabul, last week. Six people were killed and more than 100 civilians, including 60 children, were wounded in that attack.

According to the United Nations, 3,804 civilians -- including more than 900 children-- were killed in Afghanistan in 2018, with another 7,000 wounded. It was the deadliest year to date for civilians in Afghanistan's conflict.