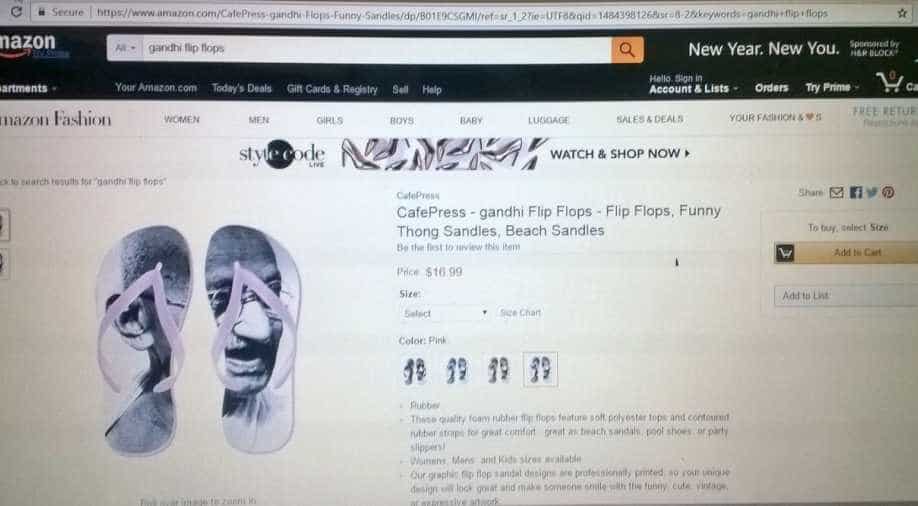 The Gandhi flip flops are being sold for $17 on Amazon's US portal. (Photo courtesy: Amazon) Photograph:( Others )

Days after the Indian government took umbrage at Amazon over India's tricolour flag-themed doormats, the retail giant's American website has been found selling flip flops with Mahatma Gandhi's face on it.

The flip flops are being sold for $17 under its 'fashion' segment, risking a repeat of censure from the Indian government.

On January 10, India's external affairs minister Sushma Swaraj lashed out at the retail giants for selling doormats similar to India's national flag in a series of tweets. She even threatened Amazon that none of their employees would be granted visa to India if the product wasn't taken off the website.

Many countries have different laws to deal with national symbols. Indian symbols, both contemporary and modern, are viewed by the public as a manifestation of national identity. But very often, these symbols have been usurped by western retailers without understanding their contemporary political and cultural relevance.

In this case, selling Mahatma Gandhi's face on flip flops is likely to raise the hackles of the public, and political parties across the spectrum have angrily reacted to the latest discovery.

When WION contacted ruling Bharatiya Janata Party spokesperson Nalin Kohli, the response was: "Gandhi is an ideal in the world and it is not something which can be trampled around. This should be brought to the notice of the authorities.”

Former diplomat and Janata Dal (United) lawmaker Pawan Verma told WION: "This is unacceptable. The government must show annoyance. I congratulate Sushma Swaraj for her intervention on the flag issue but this too should be taken up.”

The sentiment was echoed by the Congress. “This matter should be resolved immediately like the Indian flag doormat issue. The government needs to intervene,” said Congress spokesperson RPN Singh.