Aiming for a decisive victory in the Uttar Pradesh 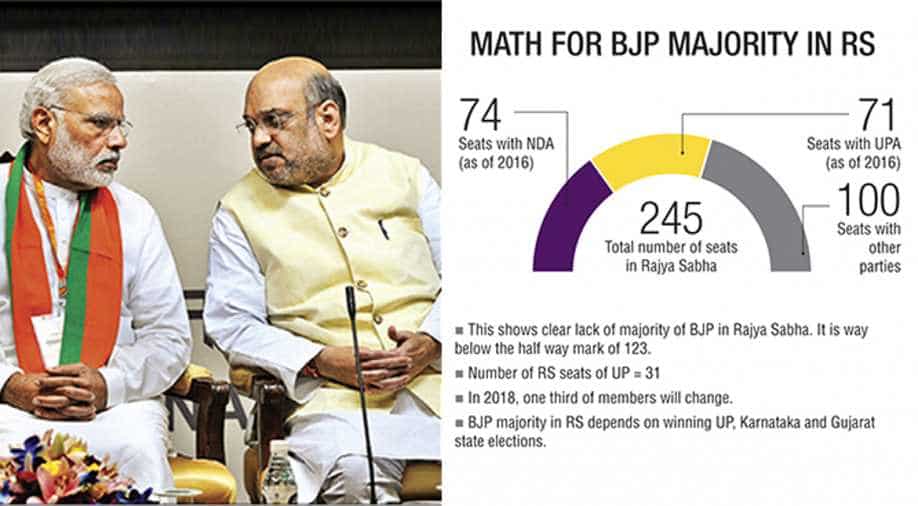 The numerical trajectory of a BJP win in the Rajya Sabha Photograph:( DNA )

The race for winning the UP election is on. However, the recent Supreme Court ruling, forbidding aspirants to use caste and religion as vote-catching tools has thrown a spanner in the works of political parties which have been exploiting these issues for far too long.

The other spoiler for them is demonetisation. No longer can alcohol and money be used to buy votes.

This electoral contest will now be about performances and showing the right dreams to people.

While in some assembly constituencies, religion and caste-based voting will continue to stay in play, overall political groups will think twice before blatantly indulging in bigotry and hate politics.

While the battle over Uttar Pradesh is going to be a litmus test for the BJP’s demonetisation drive, for the Narendra Modi government there is a lot more at stake.

The Lower House of the Indian Parliament, Lok Sabha, is dominated by the BJP and its alliance partners. In a house of 545, the National Democratic Alliance (NDA) has 339 seats, of which the BJP alone holds 280. That house is done anddusted for the ruling party.

The Upper House, Rajya Sabha, is a different story altogether. Out of 245 seats, BJP and its alliance partners hold only 74. The Opposition has 171, with the UPA’s tally being 71. This is a precarious situation for the BJP as some of its big bills are stuck in the RS.

The BJP has done what it could do to push for big-ticket legislations, sometimes taking the ordinance route and exercising its executive powers.

Since coming to power in 2014 with a landslide victory, it has carried out demonetisation, surgical strikes at terrorist camps across the Kashmir border, ban on cow slaughter, real estate development and regulation act and gas subsidy reform.

All these accomplishments were, no doubt, aimed at catering to its voter base. For its supporters, 2014-2016 showcased Modi government’s unwavering focus on good governance and its pro-poor and pro-middle class policies.

BJP’s reform agenda is stuck in the parliamentary logjam, thus making the fate of GST, Whistle Blowers Protection (Amendment) Bill, 2015, Indian Medical Council (Amendment) Bill, 1987, the Participation of Workers in Management Bill 1990 and the Constitution (Seventy-ninth Amendment) Bill 1992 and The Right to Fair Compensation and Transparency in Land Acquisition, and several others uncertain.

Win a must to bring tangible change

While four other states are also going to the polls this year, UP alone with 31 RS seats is a critical component for the BJP’s decision-making abilities. But a landslide victory in UP alone may not be enough.

When the next RS elections take place mid-2018, a third of its members will change. So, the BJP needs to win UP andKarnataka comfortably and retain its grip on Gujarat, which also goes to the polls most likely in December.

The NDA’s current tally in RS after an impressive performance by the BJP in early 2016, stands at 74, lagging far behind the halfway mark of 123.

This means that the Congress and regional parties like the Trinamool Congress, the Samajwadi Party, Biju Janata Dal and the AIADMK still have the power to stonewall BJP-backed legislations.

The saffron party’s inability to build bridges with key opposition parties and its failure to successfully woo potential allies is proving to be a costly affair.

Narendra Modi understands the importance of translating words into action. Otherwise, the BJP will look like any other party — all promises and no delivery.

The last 70 years, dominated by the Congress, have been marked by hollow rhetoric and government inaction.

For the Congress, the 2017 elections in Punjab, Goa, UP, Uttarakhand and Manipur will be all about whether it can emerge from obscurity.

For the SP or BSP,  it will be a test of whether it can continue to stem the influence of the big national player, the BJP, in regional politics. At the end of the day, the great game is about who will finally control the Rajya Sabha.

While criticising the bourgeoise, Karl Marx and Frederick Engels had remarked: “It has pitilessly torn asunder the motley feudal ties that bound man to his “natural superiors”, and has left remaining no other nexus between man and man than naked self-interest, than callous “cash payment”.

It has drowned the most heavenly ecstasies of religious fervour, of chivalrous enthusiasm, of philistine sentimentalism, in the icy water of egotistical calculation. It has resolved personal worth into exchange value, and in place of the numberless indefeasible chartered freedoms, has set up that single, unconscionable freedom — Free Trade.

In one word, for exploitation, veiled by religious and political illusions, it has substituted naked, shameless, direct, brutal exploitation.

It may very well be a reflection of the political systems many nations have today and something that the people of India need to reflect on when they go out to cast their ballot. Their votes will determine the path India will take for many decades to come.