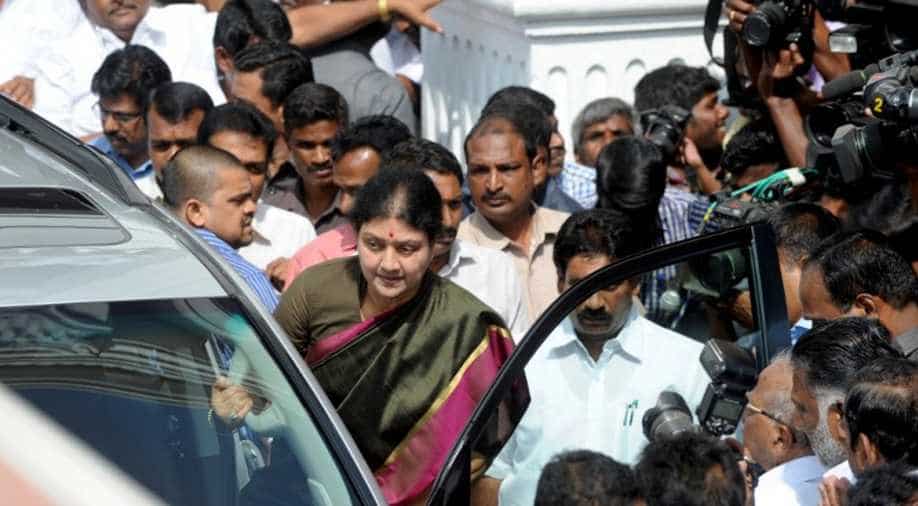 Sasikala is currently in jail after being convicted in the disproportionate assets case against her. Photograph:( AFP )

Jailed AIADMK general secretary VK Sasikala Thursday moved the Supreme Court seeking re-examination of its verdict holding her guilty and sentencing her to four-year imprisonment in a graft case.

The review petition filed by Sasikala and two others -- VN Sudhakaran, Jayalalithaa's foster son, and Elavarasi, widow of Sasikala's elder brother -- has challenged the setting aside of Karnataka High Court verdict acquitting her and restoring the trial court verdict in toto.

The trial court in Bengaluru had convicted Sasikala along with Jayalalithaa, Sudhakaran and Elavarasi in the case for amassing assets disproportionate to their income.

An advocate privy to the review petition said Sasikala has relied on an earlier top court verdict of 1991 in which after the death of a prime accused, the proceeding against the co-accused was also abated in a corruption case.

Sasikala was convicted in the case by the top court on February 14.

The Supreme Court had set aside the Karnataka High Court order acquitting all the four accused and "restored in toto" the trial court's decision in the 19-year-old disproportionate assets case.

The special trial court had found disproportionate assets worth Rs 53.60 crore, which Jayalalithaa and the three others could not account for. The CBI had alleged that the unaccounted wealth was in the tune of Rs 66.65 crore.

Sasikala had been in the jail in 1996 when the case was registered and later in 2014 after the Special trial court convicted and awarded a four-year sentence with a fine of Rs 10 crore. Jayalalithaa was then awarded four-year jail term, besides a fine of Rs 100 crore.

The apex court, which abated the proceedings against Jayalalithaa who breathed her last on December 5 last year, held that the criminal conspiracy was hatched at her Poes Garden residence in Chennai.