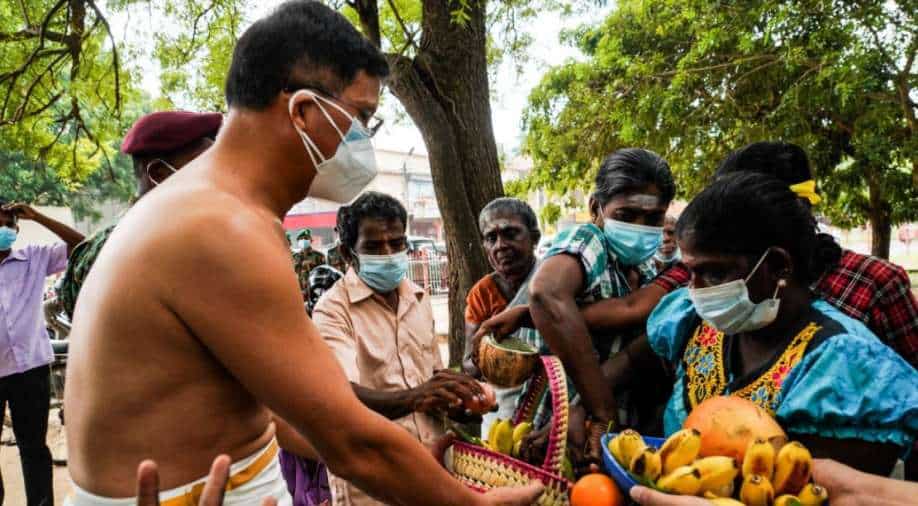 The Chinese ambassador Qi Zhenhong toured Jaffna in northern Sri Lanka as he visited a library and met some fishermen. He even went bare-chested for a temple run.

China has been forced to cancel a solar power project in Sri Lanka.

Reports say there was pressure from India, others say the local population rejected it. China however has reacted with a publicity campaign.

The Chinese ambassador Qi Zhenhong toured Jaffna in northern Sri Lanka as he visited a library and met some fishermen. He even went bare-chested for a temple run.

🇨🇳Ambassador Qi Zhenhong started his first visit to the Northern Province of #SriLanka 🇱🇰 from the #Jaffna Public Library.

Laptops and books were donated to enhance the capacity building and enlarge the collection of this well-known library in Asia.#CNLK65 pic.twitter.com/MoHFgFkKRS

In the last two days, ambassador Zhenhong has been all over Jaffna. At the local library, he donated books and laptops and at the dock, he brought fishing nets and food parcels.

At the temple, he went bare-chested with a flower basket in an attempt to charm the locals.

China was contracted to build a solar network near Jaffna, however, the Chinese embassy earlier made an announcement saying: "The project to build hybrid energy system in three northern islands of Sri Lanka has been suspended due to 'security concern' from a third party."

🇨🇳Ambassador Qi Zhenhong paid homage to the historic #Nallur Kandaswamy Kovil at #Jaffna with full respect to the Hindu religious and cultural tradition.

Amb. Qi also made a donation to the Kovil and shared pooja with the needy citizens outside after his visit.#CNLK65 pic.twitter.com/rAZwPLGLae

No one really knows about the "third party". However, China believes it is India. New Delhi has considerable clout in northern Sri Lanka as 70 per cent of the island's Tamil population lives in the area and traditionally they have backed India.

The Chinese ambassador had asked an Army official how far is India/Indian Ocean stretch and was told "it is exactly 30km from this point".

🇨🇳Amb. Qi Zhenhong had a fruitful discussion with 🇱🇰NP Governor Jeewan Thiagarajah this evening on how to enhance mutual cooperation and improve local Tamil community livelihoods.

5 ROI water purification mobile plants have been donated by @ChinaEmbSL to 5 districts in the NP. pic.twitter.com/Ha8tubl2cf

The proposed solar project was just miles off the Indian coast. Officially, New Delhi has been silent over any form of protests, however, China does not want to take chances, so the Chinese Communist Party dispatched their ambassador to Jaffna to win over the Tamils.

Most Chinese projects are concentrated in southern Sri Lanka and the northern part is largely been ignored and the fact that it has ties with India makes it a complicated equation.

Beijing's strategy has been to throw money at the problem. China has donated goods worth $100,000 to fishermen in Jaffna giving away books and laptops but Tamils continue to be wary.

The ambassador's visit is also a sign of deteriorating China-Lanka ties. Earlier, Colombo had banned the import of Chinese fertilizers.