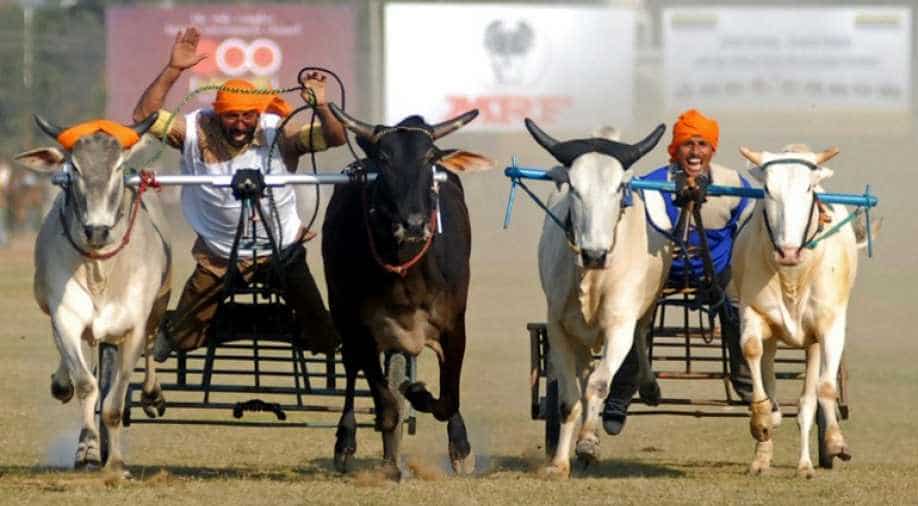 Maharashtra's bullock cart race was banned by the Supreme Court two years ago. 'My department has appointed Fali Nariman and CP Rao four months back to fight our case in the SC,' said Jankar. (Representative image) Photograph:( AFP )

Maharashtra’s Minister for Animal Husbandry, Dairy Development and Fisheries Department Mahadeo Jankar on Tuesday said the ban on the ‘traditional’ bullock cart race must be revoked. “I respect the judiciary. However, considering the Jallikattu case of Tamil Nadu, I feel the apex court must consider the sentiments of the people of Maharashtra as well. We would take a legal recourse in the matter,” Jankar said.

“My department has appointed Fali Nariman and CP Rao four months back to fight our case in the SC,” claimed Jankar.

When asked why doesn’t the government follow the Tamil Nadu example and seek an ordinance from the Centre, Jankar says, “It can’t be done as the review petition is already pending in the Supreme Court.”

Interestingly, politicians along with the farmers associations and bullock-cart association had already filed review petition in the Apex Court which was clubbed with Jallikattu petitions. The verdict is still pending.

Farmer leader Jankar belongs to Rashtriya Samaj Paksha, an ally of the ruling coalition in the state, and was inducted in the government during last year’s cabinet expansion.

When Jankar was probed further, he said, “Some organisations had sought my help to fight the case in the apex court. So, I agreed to give them the best lawyers who usually take only big cases. The two appointments have been approved by my department three-four months ago. A proposal to the law and judiciary will be sent soon.”

Shiv Sena is also seeking reversal of ban on the grounds that bullock cart racing holds the same significance for Maharashtrians as Jallikattu does for Tamils. Party led an agitation in Pune on Saturday and now plans to take it across Maharashtra.

Politicians in Maharashtra claim the race is associated with religious fair and it does not reflect on any provision of the Prevention of Cruelty to Animals (PCA) Act.

The animal activists say otherwise. “Bulls involved in racing are physically and mentally tortured for human pleasure and enjoyment. This violates the provisions of the PCA Act particularly, Section 3, 11 (1) (a) and (m) of the Act,” said a PETA activist.