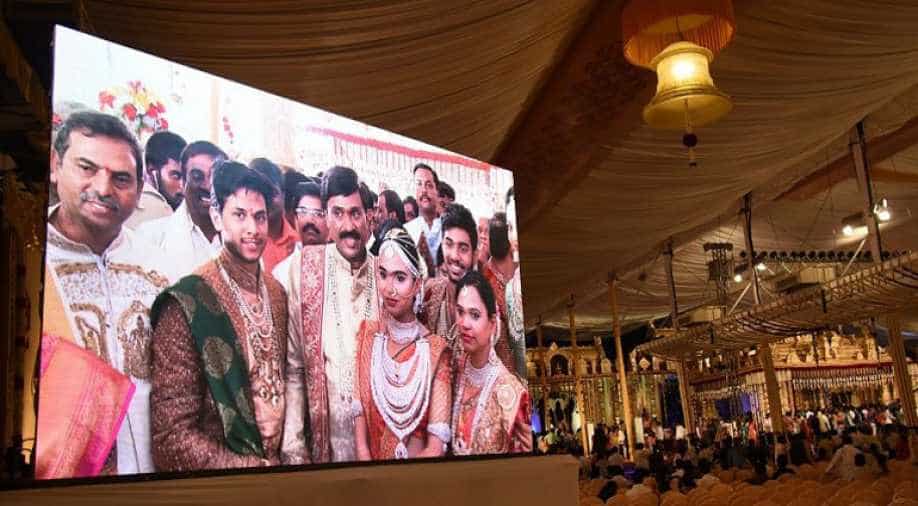 Janardhan Reddy is seen on a big screen as he poses with his daughter Bramhani and son-in-law, Rajeev Reddy during their wedding in Bangalore. Photograph:( AFP )

The raids are reportedly being conducted on at four of Reddy’s residences and at his mining company in Bellary. The exact reason for the raids is not known.

The former BJP lawmaker made headlines for the extravagant wedding of his daughter a few days ago which came at a time when Indians were grappling with a cash crunch caused by government's decision to demonetise Rs 500 and Rs 1000 notes. Over 50,000 reportedly attended the wedding at the Bangalore Palace.

The extravaganza reportedly involved a cost of $75 million, AFP reported. Guests received their invitations on LCD devices and helium balloons featuring images of the Reddy family were reported to be floating above the palace.

Speaking to journalists in his home town last week, he refused to reveal how much he was spending on the celebrations, but said everything would be declared to the tax authorities.

The wedding was kept out of bounds for the media.

The former BJP lawmaker is out on bail after spending three years in jail for his alleged involvement in the multi-crore mining scam that shook Karnataka in 2010-11.