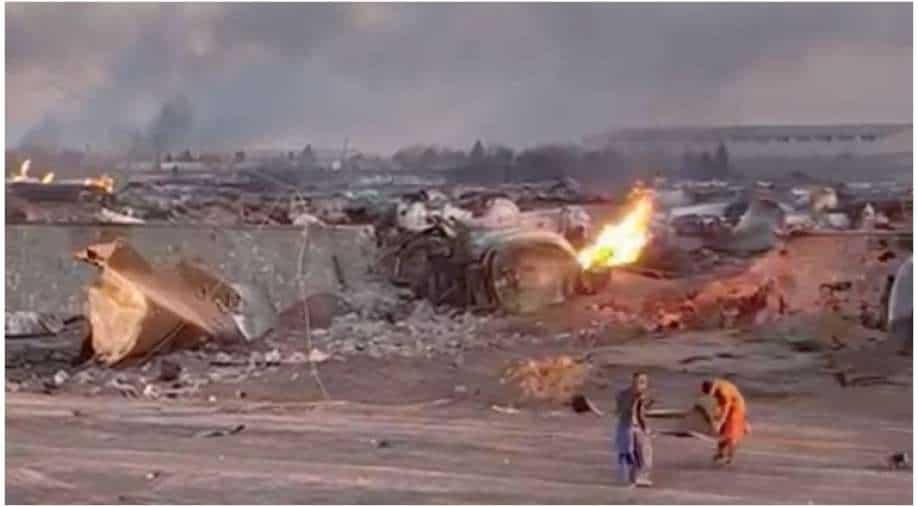 People carry debris at the burning site where fuel vehicles exploded in a massive blaze, near Herat, Afghanistan February 14, 2021, in this still image from a social media video.  Photograph:( Reuters )

Afghanistan on Monday sent investigators to its western border with Iran to investigate the fire that tore through customs post. At least 60 people were injured in the fire on Saturday (January 13)  as hundreds of fuel vehicles exploded in the blaze this disrupted power supply and caused millions of dollars of damage. The cause of the fire was unknown.

Herat's governor Waheed Qatali told media that there were no reports of deaths and they were still investigating.

A tanker caught fire, triggering the blaze, but the cause of that fire was still unclear, he said.

Amin Babak, a spokesman for Afghanistan's Chamber of Commerce and Investment, said around 600 vehicles waiting to complete customs inspections had been damaged in the fire. More than half contained fuel and gas and some had been looted, he said.

Babak said the losses for Afghan traders were estimated at around USD 100 million. This is another blow for Afghanistan economy which is already struggling due COVID pandemic.

Omar Joya, chief economist at the Kabul-based Biruni Institute, said that the blaze could lead to a temporary increase in domestic oil prices, but that importers had sufficient capital to import new oil so prices would likely stabilise relatively quickly.