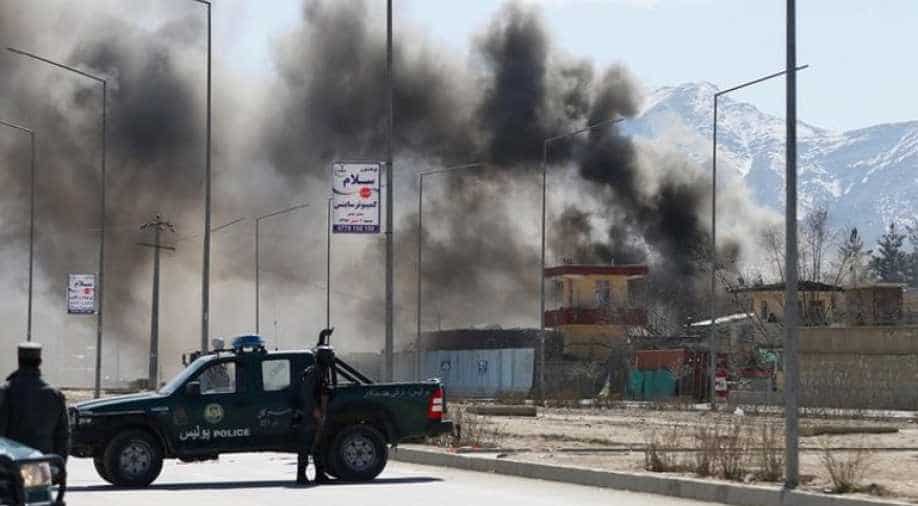 Explosions and gunfire echoed through Kabul after near simultaneous Taliban suicide assaults on two security compounds Wednesday, as the insurgents ramp up attacks even before the start of their annual spring offensive.

The death toll in the attack has quickly spiked to 16, Afghanistan's health ministry spokesman said.

A suicide car bomber struck an Afghan police precinct in western Kabul and a gun battle ensued after another attacker snuck in, officials said, in a brazen five-hour assault which sent clouds of acrid smoke billowing into the sky.

In the second attack, a suicide bomber blew himself up at the gates of an Afghan intelligence agency branch in eastern Kabul while another assailant was gunned down while trying to enter the compound, officials added.

The Taliban claimed both assaults, with spokesman Zabihullah Mujahid calling them "martyrdom attacks" in a Twitter message.

The health ministry said the wounded, some of them in critical condition, had been rushed to hospitals.

"More casualties are expected as the ambulances are on their way," ministry spokesman Waheed Majroh told AFP.

Afghan police and troops are battling a resurgent Taliban as the insurgents escalate nationwide attacks, even in winter months when the fighting usually wanes.

"After the killing of Mullah Salam and the Taliban's defeat on many other fronts, the terrorists are launching such attacks to raise the moral of their fighters," President Ashraf Ghani said, condemning the bombings.

Salam, a Taliban commander who twice oversaw the capture of the strategic northern city of Kunduz, was killed on Sunday in a US air strike in a major blow to the insurgent group.

But the Taliban are preparing for an intense new fighting season in the spring as the government's repeated bids to launch peace negotiations have failed.

"We share the sorrow of all Afghans over these heinous acts," said the US embassy in Kabul, condemning the attack.

"To callously target Afghan men and women who devote their lives to serving and defending their fellow citizens, as the Taliban did today, is an act of extraordinary cowardice."

The latest violence comes two days after an Afghan policeman linked to the Taliban shot dead 11 of his colleagues at a checkpoint in the southern province of Helmand, in the latest so-called insider attack.

Such attacks -- when Afghan soldiers and police turn their guns on their colleagues or on international troops -- have sapped morale and caused deep mistrust within security ranks.

Afghan forces, already beset by record casualties, desertions and non-existent "ghost soldiers" on the payrolls, have been struggling to rein in the Taliban since US-led NATO troops ended their combat mission in December 2014.

Kabul last month endorsed US general John Nicholson's call for thousands of additional coalition troops in Afghanistan to fend off the militants before the spring offensive.

Extra troops were needed to end the stalemate in the war, Nicholson, the top US commander in Afghanistan, told the US Congress in what could be President Donald Trump's first major test of military strategy.

Separately, the Pentagon this year said it would deploy some 300 US Marines this spring to Helmand province alone.

The Marines will assist a NATO-led mission to train Afghan forces, in the latest sign that foreign forces are increasingly being drawn back into the worsening conflict.