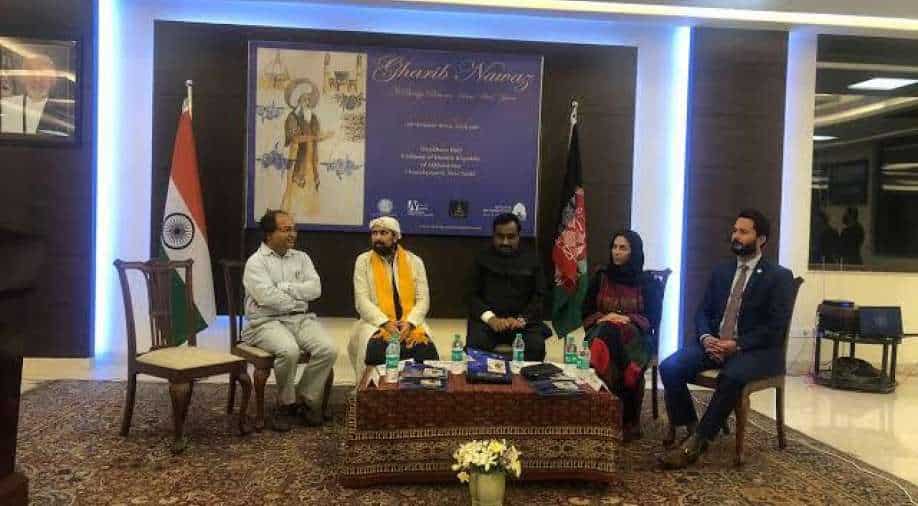 The "bridge between Ajmer and Chisht" launched by the Afghan embassy in 2019 Photograph:( Others )

In a gesture signifying strong cultural connect between India and Afghanistan, Afghan President Ashraf Ghani will be sending a "chadar" for the Ajmer Sharif by the end of this week.

In a message, the Afghan President said, "It is a singular honour" to offer the "chadar" and "as an Afghan and as a student of Sufi order for over 50 years, I have been fascinated with character, impact and reach of Khawaja Garib. Nawaz. Despite a thousand years, there is much to study and learn from the way the Chishty order the spread from a district in Herat to becoming a moral force in the continent".

The Afghan President in his message said, "millions of people across the centuries have found comfort, meaning, and direction from absorbing the reflection of Chishty order in general and the foundational thought of Khawaja Moinuddin in particular".

Chishty Order in Islam, which Khwaja Moinuddin Chishty propagated follows the popular Sufi tradition and began in Chisht, a small town near Herat, Afghanistan. The order known for its tolerance and openness is quite popular in the Indian sub-continent and includes many other famous Sufi saints like Nizamuddin Auliya whose dargah is in Delhi.

The development comes days after Afghan Cd' A (charge de affairs) Tahir Qadiry had visited the holy place a month ago. Ahead of his new posting as the Afghan envoy to Poland, he was able to convince the President to send the "chadar" which he sees as a good "shagun" (omen).

Speaking to WION last week when India PM and the Afghan President held a virtual summit, he said, this was "one particular place which I really love to go there was Ajmer Sharif because we have a common history there. It took me a couple of hours to go there, the magnificent dargah, a lot of people holding prayers and we had a very good tour of the dargah too. We had qawwali there, which is part of it."

The Sufi connect is crucial people to people connect between the two countries and as is seen a crucial bulwark against extremism.

Haji Syed Salman Chishty, Gaddi Nashin - Dargah Ajmer Sharif(Chairman - Chishty Foundation), said, "It's a major boost in the bilateral relationship between India and Afghanistan as well as a strong message to the extremist radicals in Afghanistan who have destroyed many Sufi Shrines and centers of Unity. That will be important as it's the first-ever such official gesture from the President of Afghanistan"

The Afghan mission in 2019 launched a program called--"Herat--the bridge between Ajmer and Chisht". The National General Secretary of the ruling BJP party, Ram Madhav, Salman Chishty were present at the program. The Afghan side has sent a group of Indian sufies to the Chishti to show the connection between Ajmer and the celebrated Sufi order.

The Chisht order is still thriving in Afghanistan. Chisht is one of the only two places in Afghanistan that carries the suffix of Sharif (noble). The other place is Mazar-E-Sharif in the country's Balkh province that has grown around the shrine of Hazrat Ali.