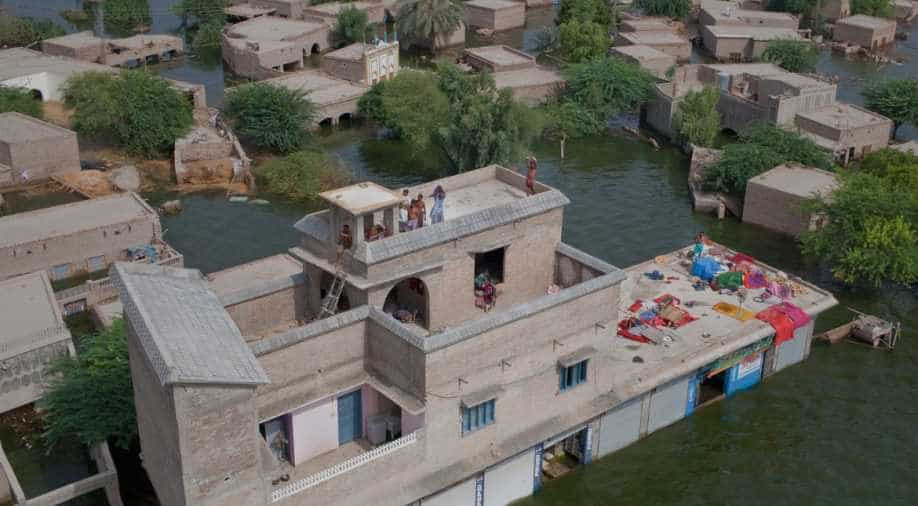 Poorly built homes across Pakistan, particularly in rural areas, are susceptible to collapse during the annual spring and monsoon rains in July-August, which are often heavy. Photograph:(Getty)
Follow Us
Flash floods caused by torrential rains have killed at least 33 in northern Pakistan, including 31 from a village near the border with Afghanistan, officials said today.

The rains began late Saturday and were concentrated mainly in the northwestern province of Khyber Pakthunkwa, which has been badly affected by flooding in recent years that some scientists have linked to climate change.

The worst hit district was Chitral, on the country's northwest border, where flood waters swept away a mosque, several houses and army post in the remote village of Ursoon, district mayor Maghfirat Shah told AFP.

Osama Waraich, another senior local official, added that eight bodies of the missing villagers had been found from the Afghan side and six soldiers were still missing.

Separately, two Chinese engineers were killed and five Pakistani workers injured when the roof of a construction site collapsed at Tarbela
Dam owing to the rains that began late Saturday, Latifur Rehman, spokesman for the Provincial Disaster Management Authority said.
Rescue and relief operations were underway, he added.

Poorly built homes across Pakistan, particularly in rural areas, are susceptible to collapse during the annual spring and monsoon rains in July-August, which are often heavy.

During the rainy season last summer, torrential downpours and flooding killed 81 people and affected almost 300,000 people across the country.

The worst flooding in recent times occurred in 2010, which covered almost a fifth of the country's total land mass, killed nearly 2,000 people and displaced 20 million.