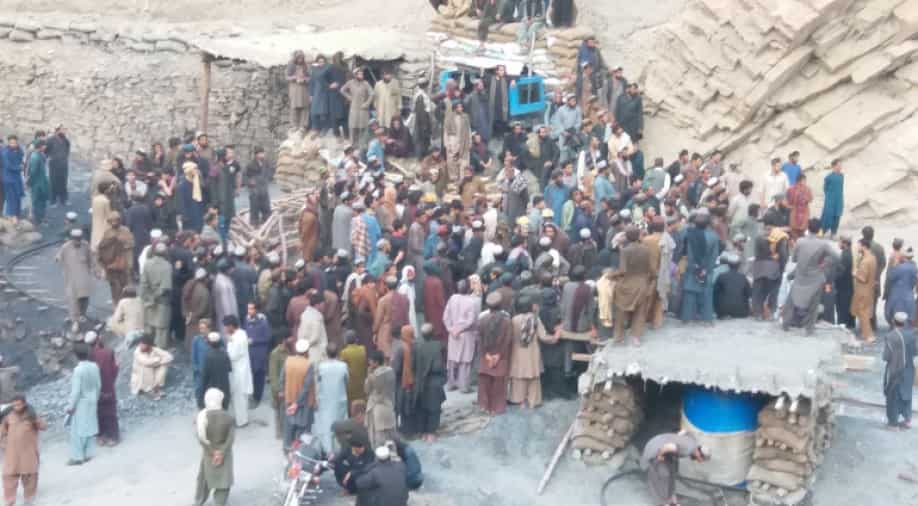 Accidents are frequent in Pakistan's south-western Balochistan province's mines and are mainly due to inadequate safety measures. Photograph:( Twitter )

At least 18 people were killed, 13 injured and about a dozen went missing as two coal mines collapsed in different areas of Pakistan's Balochistan on Saturday, media reports said.

A mine in Marwar area near provincial capital Quetta collapsed due to gas explosion and about two dozen miners were trapped inside.
Deputy Commissioner Quetta Farrukh Atique told PTI that that 16 people have died in the collapse.

"We have recovered all the 16 bodies from the rubble caused by the collapse in the coal mine," Atique said.

"We have also rescued six workers who are trapped in the rubble and have sent them to the hospital for treatment but one miner is still trapped under the rubble," he said.

Rescue officials said a dozen of the dead miners belonged to Shangla district of Khyber Pakhtunkhwa.

"The collapse apparently took place because of a gas explosion and the miners working at that time were trapped inside. Some died on the spot while others who were badly injured breathed their last under the rubble," Atique said.

Chief of Provincial Disaster Management Authority (PDMA) Muhammad Tariq also confirmed that 16 miners had been killed.
"So far 16 dead bodies and six injured miners have been recovered from the mine," he said.

In another incident, at least nine miners were trapped in a mine of Pakistan Mineral Development Corporation (PMDC) near Quetta, an official said.

He said the rescue workers recovered two dead bodies and two injured miners, while efforts were on to recover another five workers who remain trapped.

Mining is considered highly dangerous in Pakistan where dozens of miners die each year due to lack of modern mining facilities, training and equipment.

According to the Pakistan Central Mines Labour Federation (PCMLF), about 100 to 200 labourers die on average in coal mine accidents every year.