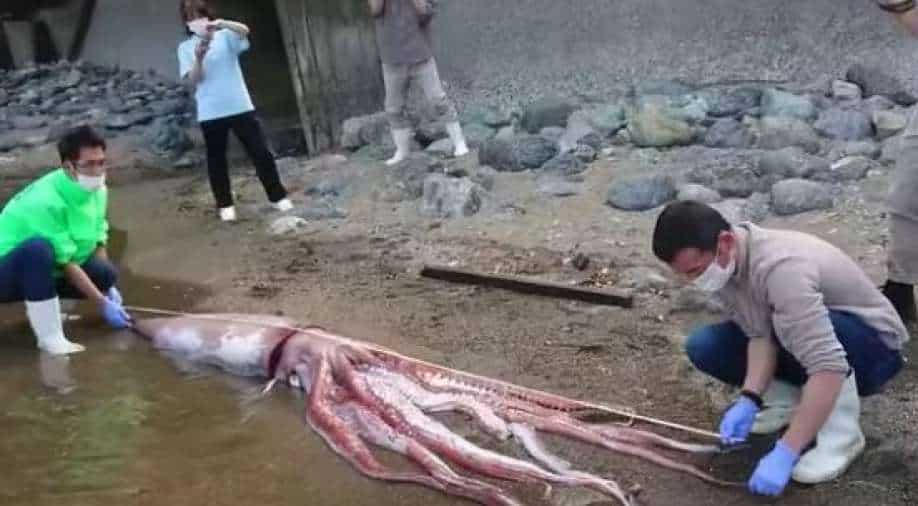 Squids of this size can only be found in the deep sea. Photograph:( Twitter )

A giant squid, measuring about 9.8ft, has been sighted on a beach in Japan. The squid was found stranded at Ugu beach in Obama of Fukui Prefecture, at 10am local time Wednesday in what local authorities described as a rare sighting.

On April 20, a nine-foot-long giant squid was discovered stranded on a beach in what local authorities described as an uncommon event.

A local citizen observed the squid at Ugu beach in Obama, Fukui Prefecture, on the Sea of Japan coast, at 10 a.m.

The squid was still alive when it was discovered, according to the Obama Municipal Government.

Officials say it's unusual for a gigantic squid to wash up alive on the beach.

The deep-sea creature will be brought to Sakai Prefectural City's Echizen Matsushima Aquarium.

Squids of this size can only be found in the deep sea.

According to National Geographic, a more elusive squid reaching 24 feet was caught and brought to the surface by experts at Japan's National Science Museum in 2006.

In 2004, the first photographs of the female squid were captured.

"What were once monsters to be feared are now curious and magnificent creatures that delight. We like to feel that science and exploration has brought about this change."

Read the story of how scientists captured a giant squid on video: https://t.co/RUu2YkCDFS pic.twitter.com/J2ERl10blz