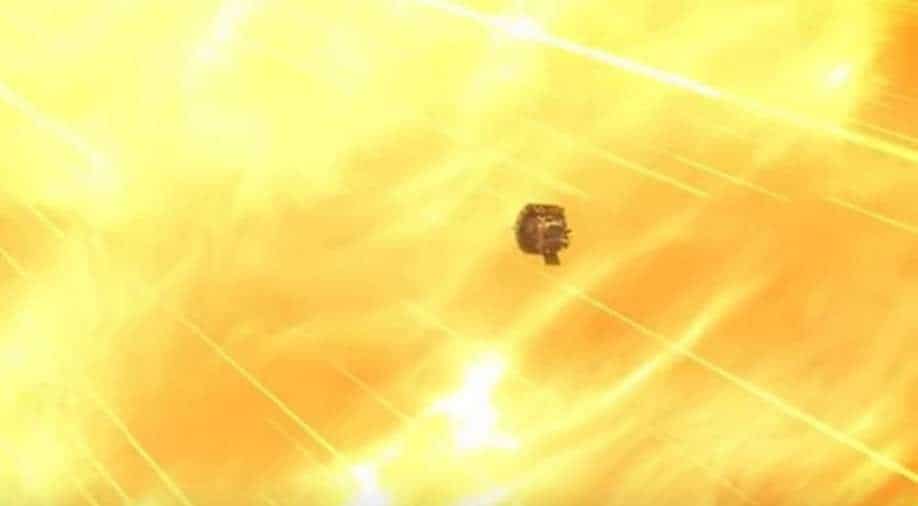 The new milestone marks one major step for Parker Solar Probe and one giant leap for solar science. Photograph:( Others )

"Parker Solar Probe 'touching the Sun' is a monumental moment for solar science and a truly remarkable feat," said Thomas Zurbuchen, the associate administrator for the Science Mission Directorate. Parker Solar Probe was launched in 2018.

A NASA spacecraft has officially "touched" the sun, falling through the corona, an unknown region of the solar atmosphere.

Scientists made the announcement at a meeting of the American Geophysical Union on Tuesday.

During the Parker Solar Probe's seventh close encounter to the sun in April, the spacecraft sailed through the corona.

The data took a few months to arrive, and then several more months to confirm, according to the scientists.

When Parker first crossed the jagged, uneven boundary between the solar atmosphere and outgoing solar wind, it was 8 million miles (13 million kilometres) from the sun's centre.

According to scientists, the spacecraft dipped in and out of the corona at least three times, each time with a smooth transition.

"The Parker Solar Probe "touching the Sun" is a monumental moment for solar science and a truly remarkable feat," said Thomas Zurbuchen, associate administrator for NASA Headquarters in Washington.

"Not only does this milestone provide us with deeper insights into our Sun's evolution and it's impacts on our solar system, but everything we learn about our own star also teaches us more about stars in the rest of the universe."

According to the statement issued by the NASA, Parker is finding new discoveries that other spacecraft couldn't observe because they were too far away, including from within the solar wind, which is the flow of particles from the Sun that can affect us on Earth.

Parker revealed in 2019 that magnetic zig-zag formations in the solar wind, known as switchbacks, are abundant near the Sun.

However, it remained a mystery as to how and where they formed.

Parker Solar Probe has now travelled close enough to identify one spot where they originate: the solar surface, after halving the distance to the Sun since then.

The first flyby into the corona – and the promise of many to come – will continue to deliver information on processes that are difficult to examine from afar.

Until its grand finale orbit in 2025, Parker will continue to get closer to the sun and dive deeper into the corona.