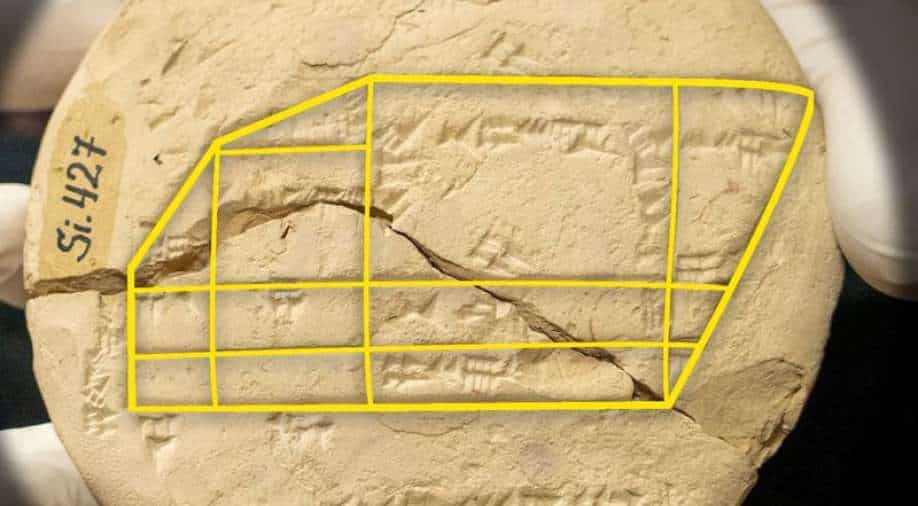 Si.427 is a hand tablet from 1900-1600 BC, created by an Old Babylonian surveyor. The tablet was originally discovered in the 19th century. (UNSW) Photograph:( Twitter )

In a study published in Foundations of Science, Sydney mathematician Daniel Mansfield discovered that a 3,700-year-old object from the Old Babylonian era includes the world's first example of complicated geometry.

A mathematician from Australia's University of New South Wales discovered that a 3,700-year-old tablet, previously thought to be a "teacher's list of school difficulties," is the earliest example of applied geometry.

The tablet was found in the 19th century and has spent almost a century in an Istanbul museum.

The tablet was unearthed in what is now central Iraq and was given the designation Si.427.

The circular tablet features a diagram drawn by a Babylonian surveyor about 1900-1600 BC.

"It's the only known example of a cadastral document from the OB (Old Babylonian) period, which is a plan used by surveyors to define land boundaries," mathematician Daniel Mansfield said.

This is a significant object because the surveyor uses what are now known as "Pythagorean triples" to make accurate right angles.

"This is over a thousand years before Pythagoras was born. The discovery turns our understanding of the history of mathematics on its head. It is generally accepted that trigonometry – the branch of maths that is concerned with the study of triangles – was developed by the ancient Greeks studying the night sky in the second century BCE," Dr Mansfield said.

Mansfield and his UNSW colleague Norman Wildberger had previously examined another tablet from the same age that used Pythogorus triplets to depict right-angled triangles.