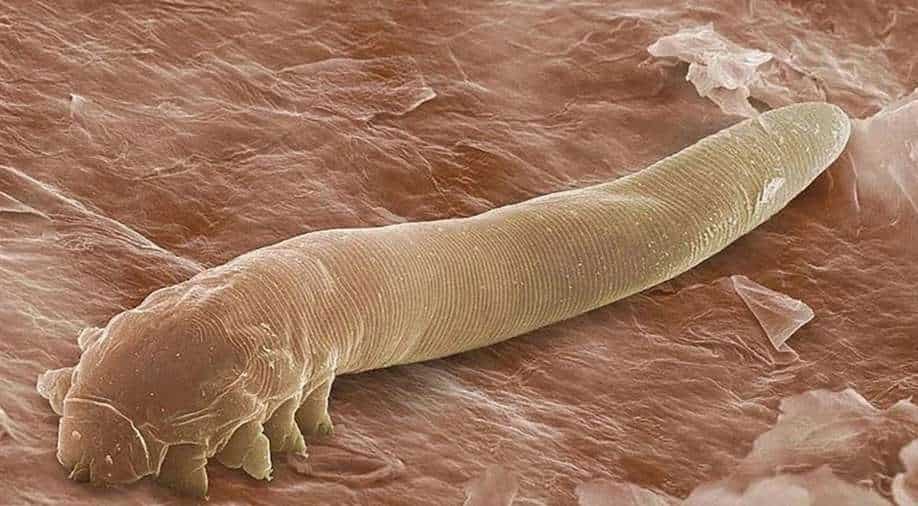 Demodex folliculorum are tiny creatures that feed on the oil that leaks from your hair follicles. Photograph:( Twitter )

Most people's daily skincare routines include of exfoliating, moisturising, and SPF.What about mites that live their entire lives deep inside our faces and clean our pores, like Demodex folliculorum? The 0.3mm long organisms emerge from the pores at night in search of a fresh skin follicle, a partner, and a mate.

A recent study discovered that genetic alterations in parasite mites that live and reproduce on human faces can be harmful to the host.According to research published in the journal Molecular Biology and Evolution, these 0.3 millimetre long organisms probably run the risk of going extinct because of inbreeding and gene loss.

The study focused on Demodex folliculorum, a microscopic parasitic mite that can be found on eyebrows, eyelashes, or in close proximity to the nose. Demodex brevis, the other recognised kind of facial mite, was not examined in the study.

According to estimates from earlier studies, these mites may be carried by 50–100% of individuals. They are common, although nothing is known about them. For instance, scientists are unsure of their evolutionary history or the reason they are nocturnal.By gathering and examining the DNA of Demodex folliculorum, Braig and his associates hoped to close this information gap.

Alejandra Perotti, associate professor of invertebrate biology at the University of Reading and co-leader of the study, stated in a statement that these parasites have evolved to live in the safety of skin pores.

This comes at a price: The DNA mutations that caused the odd physical traits and behaviours were documented by the researchers.

The findings demonstrated that the species has grown incredibly basic. The researchers noted that they require the least amount of protein of any closely related species to thrive. They emphasised that inbreeding does not result in the introduction of additional genes.