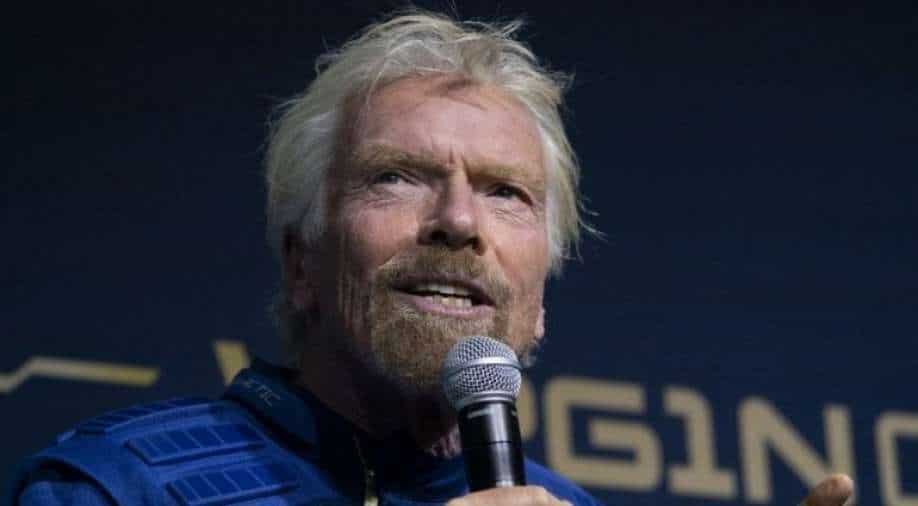 With both tycoons having created space tourism companies and positioned themselves as leaders in the suborbital-flights-for-the-wealthy sector, the move signaled clear if not fierce competition

British mogul Richard Branson one-upped rival Jeff Bezos on Thursday, announcing that he too will blast beyond Earth's atmosphere nine days ahead of the aspiring billionaire astronaut.

A successful flight by Branson aboard Virgin's VSS Unity spaceplane would mark a key milestone in a race to usher in a new era of private commercial space travel.

It would also mean that Branson would travel beyond Earth's atmosphere ahead of Bezos, the founder of rival space tourism venture Blue Origin.

Bezos, who founded retail giant Amazon.com Inc, is slated to fly to space on July 20 along with his brother, Mark, trailblazing female pilot Wally Funk and a so-far unidentified person who plunked down $28 million to join the suborbital joyride.

With both tycoons having created space tourism companies and positioned themselves as leaders in the suborbital-flights-for-the-wealthy sector, the move signaled clear if not fierce competition.

The race, which also includes SpaceX Chief Executive Elon Musk, is underpinned by optimism that space travel will become mainstream as nascent technology is proven and costs fall, fueling what UBS estimates could be a $3 billion annual tourism market by 2030. Musk has not set a date for his space flight.

"Virgin Galactic stands at the vanguard of a new commercial space industry, which is set to open space to humankind and change the world for good," Branson said in a statement accompanying Virgin's announcement.

Branson's July 11 mission will be the twenty-second flight test for VSS Unity, and the company's fourth crewed spaceflight, Virgin said.

But it will be the first to carry a full crew of two pilots and four "mission specialists," including Branson.

The spacecraft developed by Virgin Galactic and Blue Origin are very different, even if the passengers will ultimately have more or less the same experience: a few minutes of weightlessness.

In the case of Virgin Galactic, the spacecraft is not a classic rocket, but rather a carrier airplane that reaches a high altitude and releases a smaller spacecraft, the VSS Unity, that fires its engines and reaches suborbital space, then glides back to earth.

Blue Origin, meanwhile, is more of a classic rocket experience, with a vertical launch after which a capsule will separate from its booster, then spend four minutes at an altitude exceeding 60 miles (100 kilometers), during which time those onboard experience weightlessness and can observe the curvature of Earth.

The booster lands autonomously on a pad two miles from the launch site, and the capsule floats back to the surface with three large parachutes that slow it down to about a mile per hour when it lands.