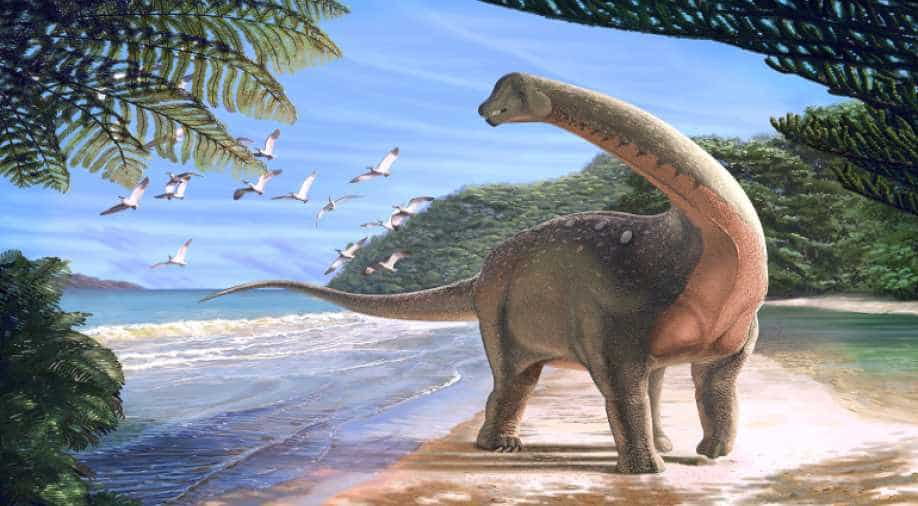 The titanosaurian dinosaur Mansourasaurus shahinae on a coastline in what is now the Western Desert of Egypt approximately 80 million years ago. Photograph:( Reuters )

Australia, known for its bizarrely gigantic spiders and unnervingly large snakes may have been home to one of the largest dinosaurs to roam planet Earth, new research reveals.

A huge dinosaur discovered in “the Land Down Under” has now been identified as a new species by palaeontologists. The dinosaur, newly named as “Australotitan cooperensis” roamed the Earth about 100 million years ago and constituted the “titanosaur” family.

The first description of the species comes 15 years after its bones were uncovered in the country. Palaeontologists estimate that the species was 5-6.5 metres (16-21 feet) high and possessed a length of 25-30 metres (82-98 feet), making it the largest dinosaurs species found on the continent.

"Based on the preserved limb size comparisons, this new titanosaur is estimated to be in the top five largest in the world," Robyn Mackenzie, a director of the Eromanga Natural History Museum was quoted as saying by AFP.

The bones were discovered on Mackenzie’s family farm in 2006, situated 1,000 kilometres away from Brisbane in the Eromanga Basin. For a year, no details of the discovery were made public. But the skeleton went on public display in 2007.

Also read: Would dinosaurs be alive if they had spaceships? Tech mogul Elon Musk believes so

But it wasn’t easy to get here. With over a decade spent on understanding the bone remains, scientists found it peculiarly difficult to ascertain the species of the dinosaur, until they found that it was a discovery of biblical proportions. Scott Hocknull, a palaeontologist at Queensland Museum, told AFP that the process of research had been a "very long and painstaking task".

The scientists used 3D scan models of bones to compare it with the remains of what may have been the species’ close relatives when dinosaurs walked the Earth.  This is not the first dinosaur skeleton to be found in this region. Many remains have been discovered in the area, and scientists believe that such groundbreaking findings are the tip of iceberg.

The research was published in PeerJ journal on Monday.