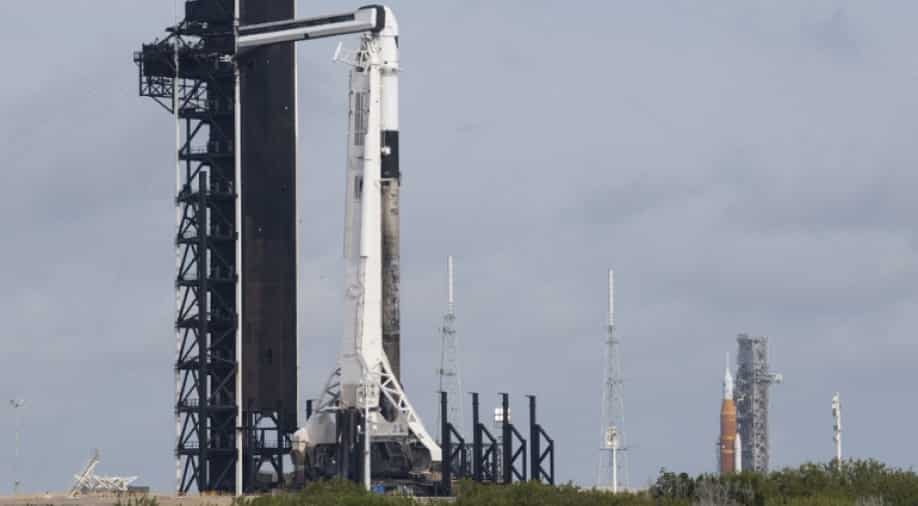 In this picture, NASA’s Space Launch System (SLS) rocket with the Orion spacecraft aboard is seen atop a mobile launcher at Launch Complex 39B at the Kennedy Space Centre in Florida. Photograph:( AFP )

Although this delay has pushed the launch date for its uncrewed test flight to the Moon to later this summer, NASA will utilise this time period as an opportunity to review scheduled and options to demonstrate propellant loading operations

NASA on Tuesday (April 19) announced that its Space Launch System (SLS) rocket and Orion spacecraft will be repaired after several failures in their tests.

Ahead of the uncrewed Artemis I lunar mission, the US space agency said that they both require upgrades as they have a faulty upper check valve and a small leak on the tail service of the mast's umbilical, located at the base of the mobile launcher and connects to the rocket’s core stage.

Although this delay has pushed the launch date for its uncrewed test flight to the Moon to later this summer, NASA will utilise this time period as an opportunity to review scheduled and options to demonstrate propellant loading operations.

Paving the way for a long-term lunar presence, NASA will land the first woman and first person of colour on the Moon through the Artemis missions. They are bound to serve as a stepping stone for sending astronauts to Mars.

NASA's recent "wet dress rehearsal" test was a failure as the researchers faced several technical hitches. The use of a liquid propellant in the test is the inspiration behind its name.

Also read | NASA to beam out Earth's location into space. Experts warn that it just might invite an alien invasion!

The test is essential as it includes the procedure of a run-through of launch operations. Without actually firing the engines, researchers perform a final countdown to within ten seconds before blast off.

The SLS will liftoff from the Kennedy Space Centre's Launch Complex 39B. The date of its launch depends on the positions of the Earth and Moon.

NASA astronauts want the spacecraft to fly in an eclipse since it requires the Sun to keep it powered and thermally regulated.

Since the Artemis space programme comprises of a series of missions, a delay in Artemis I will further postpone Artemis II and Artemis III.