NASA sent a secret message to Mars. Meet the people who decoded it 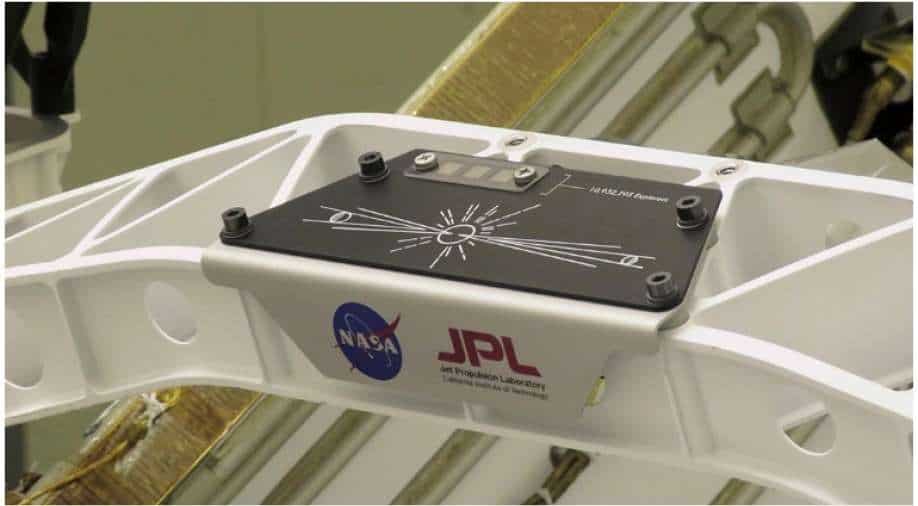 In an undated photo from NASA/JPL-Caltech, a placard on the Perseverance rover bears, in three small chips, the names of 10,932,295 people, as well as essays of the 155 finalists in NASA’s “Name the Rover” contest. Photograph:(The New York Times)
Follow Us

The person who came up with the idea for embedding a message was Ian Clark, who led development of the parachute. NASA’s previous rover, Curiosity, used the same system when it successfully landed on Mars in 2012

As NASA’s Perseverance rover fell through the Martian atmosphere last month, a video camera on the spacecraft captured the breakneck deployment of its parachute, which was decorated with splotches of reddish-orange and white.

Those splotches were a secret message.

During a news conference last week, Allen Chen, the engineer in charge of the landing system, narrated what could be seen and learned in the slowed-down video.

He added, cryptically and nonchalantly, that his team hoped to inspire others. “Sometimes we leave messages in our work for others to find for that purpose,” he said. “So we invite you all to give it a shot and show your work.”

Across the Atlantic Ocean, Maxence Abela, a 23-year-old computer science student in Paris, realized what Chen was saying: The seemingly random pattern on Perseverance’s parachute contained a code.

He called his father, Jerome, a software engineer at Google in London, and the two set to solving it.

“We like those kinds of little challenges,” Maxence Abela said. “We didn’t think we would be able to solve it, but we would at least try.”

Collaborating via teleconference, they downloaded the video, isolated images showing the fully inflated parachute and started piecing together the bits. So did others around the world, trading insights on Twitter and forums on Reddit.

“It’s just exciting that NASA is putting these little puzzles in their missions,” said Adithya Balaji, a graduate student in computer science at Carnegie Mellon University in Pittsburgh who independently tackled the problem.

Balaji compared the parachute puzzle to a couple of science fiction movies: “Contact,” where a scientist played by Jodie Foster unravels an alien message, and “The Martian,” where Matt Damon’s character Mark Watney communicates with people back on Earth using a similar code.

“I think that it’s exciting that real life can be sometimes even more exciting than the movies,” Balaji said.

The person who came up with the idea for embedding a message was Ian Clark, who led development of the parachute. NASA’s previous rover, Curiosity, used the same system when it successfully landed on Mars in 2012. But a failure of a prototype parachute intended for future missions spurred engineers to improve the design.

While watching video of a high-altitude test of the new parachute for Perseverance, Clark noticed that the checkerboard pattern on the canopy made it difficult to track how individual portions of the parachute unfurled and inflated.

Because Perseverance would be outfitted with video cameras, Clark wanted a pattern that would be visually distinct. That, in turn, provided an opportunity “to have a little fun with it,” he said.

He asked Matt Wallace, a deputy project manager for the mission, for permission.

“I told them 'OK,'” Wallace recalled. “Just make sure it was appropriate and couldn’t be misinterpreted.”

The 70-foot-wide parachute consisted of 80 strips of fabric radiating outward from the center to form a hemisphere-shape canopy, and each strip consisted of four pieces. Clark thus had 320 pieces to work with.

Some of his ideas would have required additional colors, but that could have threatened the parachute’s integrity if untested dyes weakened the fabric fibers.

“We were unwilling to go to a cloth that was dyed in a color that we had never used before,” Wallace said.

Even a pattern of just orange and white, the two colors of previous parachutes, raised potential issues. “There’s all kinds of second-guessing questions,” Clark said. “Like could having more white than orange, or vice versa, mean that the parachute was going to warm up differently and maybe that would change its behavior?”

After all, mission managers would have been embarrassed if they had to explain how they lost a $2.7 billion mission because a parachute engineer had sneaked in a secret message.

But Clark’s analysis showed no ill effects, and the plan went forward. Until recently, only about half a dozen people knew about it.

When computer scientists see something in black and white — or, in this case, orange and white — they think of binary code, the 1s and 0s that are the language of computers. That was the first clue that the puzzle solvers pursued last week.

For each orange section on the Perseverance parachute, Maxence Abela and his father wrote down a 1, and for each white section, they assigned a 0. That translated into a long string of 1s and 0s.

They thought that perhaps the digits could be rearranged into a picture, like the message that scientists broadcast in 1974 from the Arecibo radio telescope in Puerto Rico to tell distant alien civilizations of humans on Earth.

“We couldn’t find anything that looked like anything,” Maxence Abela said.

They tried breaking up the digits into groups of 8 — a common practice used in computer programming — but that too yielded gibberish.

Then the elder Abela noticed that the digits seemed to fit in groups of 10. “Every 10 bits, there would be three zeros in a row,” Maxence Abela said. That, they decided, was not a coincidence.

Still, the resulting numbers did not make sense until they realized they had read the 1s and 0s in the wrong direction, anti-clockwise instead of clockwise. When they wrote down the digits in the opposite order, the 10-digit chunks of binary code translated into small numbers, which could then be assigned to letters. The number 1 corresponded to the letter A, the number 2 was B, 3 was C, 4 was D and so on.

The message on the inner three rings: “Dare Mighty Things.”

Maxence Abela posted on Twitter his answer at 4:36 p.m. Eastern time, about two hours after Chen had dropped his cryptic hint during the news conference.

This is a credo often cited at NASA’s Jet Propulsion Laboratory in California, which built and operates Perseverance. It comes from “The Strenuous Life,” a speech by Theodore  Roosevelt in 1899: “Far better it is to dare mighty things, to win glorious triumphs, even though checkered by failure, than to take rank with those poor spirits who neither enjoy much nor suffer much, because they live in a gray twilight that knows not victory nor defeat.”

There were still some numbers and letters in the fourth ring that neither Abela could make sense of. Those turned out to be the longitude and latitude of the NASA center: 34°11’58” N 118°10’31” W.

“If you look in Google Earth, if you type in those coordinates, I think you’re about 10 feet from the door of the JPL visitor center,” Clark said.

In the evening, Adam Steltzner, the chief engineer for Perseverance, posted an annotated diagram explaining the solution.

The parachute was not the only fun that the builders of the Perseverance rover had.

Eagle-eyed observers spotted a series of drawings that represented the five rovers NASA has sent to Mars, from the small Sojourner in 1997 to Perseverance now.

A plaque that will be used to calibrate one of the rover’s main cameras includes patches of colors, but there are also whimsical drawings that include DNA, a rocket and a dinosaur.

On the edge of the calibration plaque is an inscription: “Are we alone? We came here to look for signs of life, and to collect samples of Mars for study on Earth. To those who follow, we wish a safe journey and the joy of discovery.”