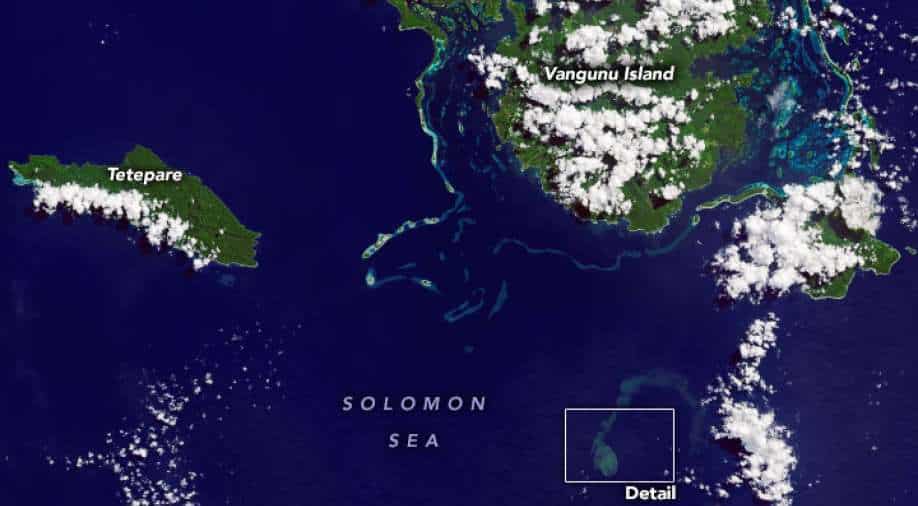 It showed an underwater eruption of the Kavachi Volcano of the Solomon Islands, which is one of the most active submarine volcanoes in the Pacific Ocean

NASA's Earth Observatory has captured satellite images of an undersea volcano eruption which shows plumes of superheated, acidic water slowly permeating in the southern Pacific. The image was taken on May 14 by the Operational Land Imager 2 on the Landsat 9 satellite. It showed an underwater eruption of the Kavachi Volcano of the Solomon Islands, which is one of the most active submarine volcanoes in the Pacific Ocean. It is known for its shark inhabitants and has been dubbed “Sharkcano” after a 2015 search expedition exploring the volcano discovered marine life in the active crater. It found two species of sharks: silky sharks and hammerheads.

The researchers also found that these sharks have evolved/mutated over time to thrive underwater on sulfur. The presence of the sharks in the crater raised “new questions about the ecology of active submarine volcanoes and the extreme environments in which large marine animals can exist,” the researchers wrote in a 2016 Oceanography article, “Exploring the ‘Sharkcano’.”

The images were shared on Twitter, showing a plume of discoloured water being emitted from the Kavachi Volcano.

In 2015, scientists found hammerhead sharks living in the hot, acidic waters of Kavachi Volcano's underwater crater. The 'sharkano', as they called it, is erupting again. https://t.co/l4Exv5GZXy pic.twitter.com/XS7QBHxqCw

However, this is not the first time that such eruptions occurred at Kavachi. It has happened twice, 2014 and 2017.

The island is named for a sea god of the Gatokae and Vangunu peoples, and it is sometimes also referred to as Rejo te Kvachi, or “Kavachi’s Oven”.

To view inside Kavachi's crater, the scientists deployed a baited drop camera to a depth of 164 feet (50 meters), according to the journal Oceanography.

Kavachi formed in a tectonically active area—a subduction zone lies 30 kilometers (18 miles) to the southwest. The volcano produces lavas that range from basaltic, which is rich in magnesium and iron, to andesitic, which contains more silica.