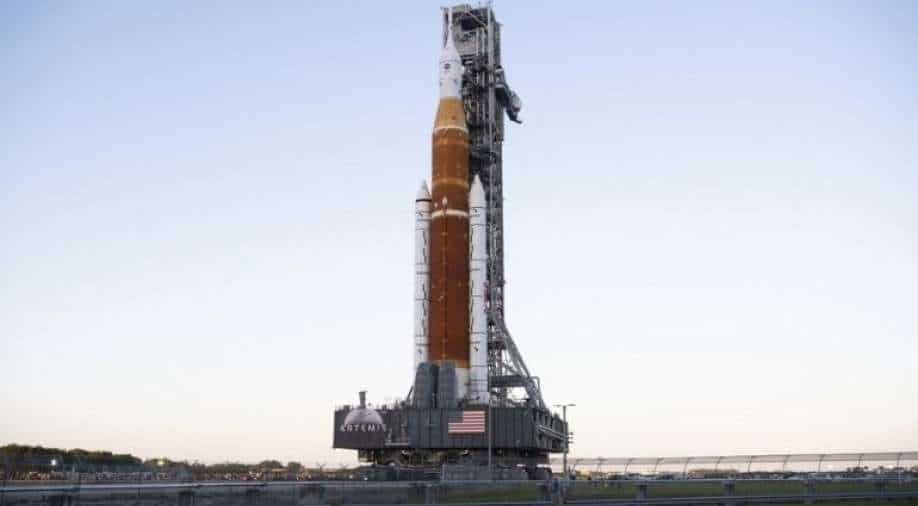 This NASA handout photo shows NASA's Space Launch System (SLS) rocket with the Orion spacecraft aboard atop a mobile launcher as it rolls out of High Bay 3 of the Vehicle Assembly Building for the first time to Launch Complex 39B, March 17, 2022, at NASA’s Kennedy Space Center in Florida Photograph:( Twitter )

US space agency NASA has started the testing of its giant Space Launch System (SLS) rocket.

The critical two-day-long test comes as NASA gears up to return human beings to the Moon.

It is also known as the "wet dress rehearsal," due to the liquid hydrogen and liquid oxygen that will be loaded into the rocket.

The countdown is now underway for the final prelaunch test for #Artemis I.

Teams will now begin practicing every step prior to liftoff for the launch of @NASAArtemis. Follow @NASAGroundSys for real-time updates: https://t.co/pweviH8UUQ pic.twitter.com/63nEldwvW8

At the beginning of the test, NASA said "The countdown is now underway."

The 322-foot (98-metre) rocket is expected to be the most powerful in history at the time it is operational.

It was rolled out to Launch Complex 39B at the Kennedy Space Centre in Florida around two weeks ago.

Rollout of the 32-story-tall Space Launch System (SLS) rocket and its Orion crew capsule marks a key milestone in US plans for renewed lunar exploration after years of setbacks, and the public's first glimpse of a space vehicle more than a decade in development.

NASA has said it was reviewing potential Artemis I launch windows in April and May, but the timeline could slip depending on results of the dress rehearsal.

The SLS-Orion, which cost some $37 billion to develop including ground systems, constitutes the backbone of the NASA's Artemis programme, aimed at returning astronauts to the moon and establishing a long-term lunar colony as a precursor to eventual human exploration of Mars.