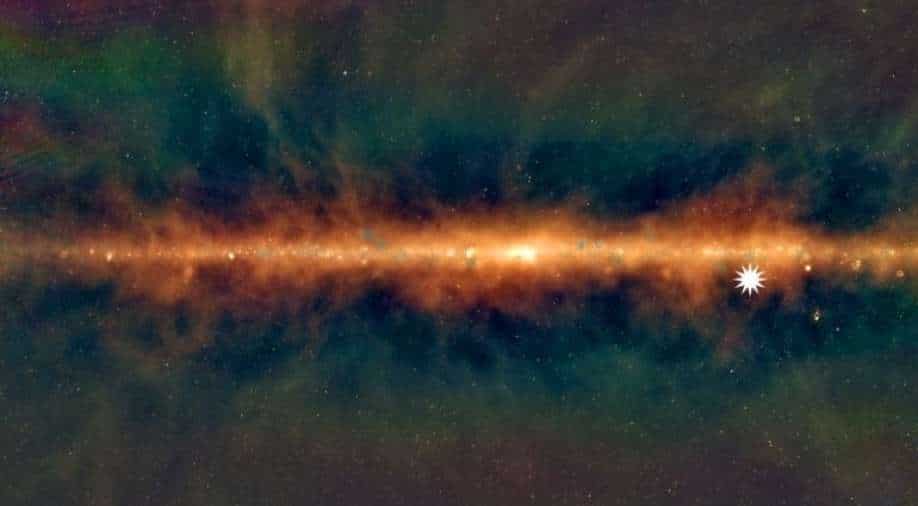 This image shows a new view of the Milky Way from the Murchison Widefield Array, with the lowest frequencies in red, middle frequencies in green, and the highest frequencies in blue. The star icon shows the position of the mysterious repeating transient. Credit: Dr Natasha Hurley-Walker (ICRAR/Curtin) and the GLEAM Team. Photograph:( Others )

Scientists believe that a mysterious signal coming from our galaxy could be one of the rarest known objects.

Also Read | A galaxy with split personality? Here's what we mean by this

The sun, located roughly 26,000 light-years from the supermassive black hole residing at the centre of the galaxy, formed about 4.5 billion years ago.

According to a paper by astrophysicist Jonathan Katz of Washington University at St. Louis, "Since the early days of pulsar astronomy there has been speculation that a rotating magnetic white dwarf might show pulsar-like activity."

"The recently discovered periodic radio transient GLEAM-X J162759.5−523504.3 is a candidate for the first true white dwarf pulsar. It has a period of 18.18 minutes (1091 s) and its pulses show low frequency (72–215 MHz) emission with a brightness temperature ∼ 1016 K implying coherent emission. It has no binary companion with which to interact. It thus meets the criteria of a classical pulsar, although its period is hundreds of times longer than any of theirs."

Yet its period of 18.18 min is hundreds of times longer than those of confirmed radio pulsars, and if it is a neutron star its mean radiated power exceeds the upper limit on its spin-down power by more than an order of magnitude.

This may be explained if it is a white dwarf pulsar, with a moment of inertia several orders of magnitude greater than those of neutron stars. The Lorentz factor of the emitting charge bunches may be bounded from below by the widths of the temporal substructure of their radiation.

If the emission is curvature radiation, the radius of curvature may be estimated from the Lorentz factor and the frequencies of emission; it is consistent with a white dwarf's inner magnetosphere but not a neutron star's.

"Nobody expected to directly detect one like this because we didn't expect them to be so bright," astrophysicist Natasha Hurley-Walker of the Curtin University node of the International Centre for Radio Astronomy Research (ICRAR) in Australia explained at the time.

"Somehow it's converting magnetic energy to radio waves much more effectively than anything we've seen before."

"If it were bright enough, optical observations could also determine its magnetic field, spectroscopically or polarimetrically," Katz explained.

"The fast-rotating, strongly magnetised, white dwarves would be promising targets for low frequency radio observations to determine if any of them are white dwarf pulsars."