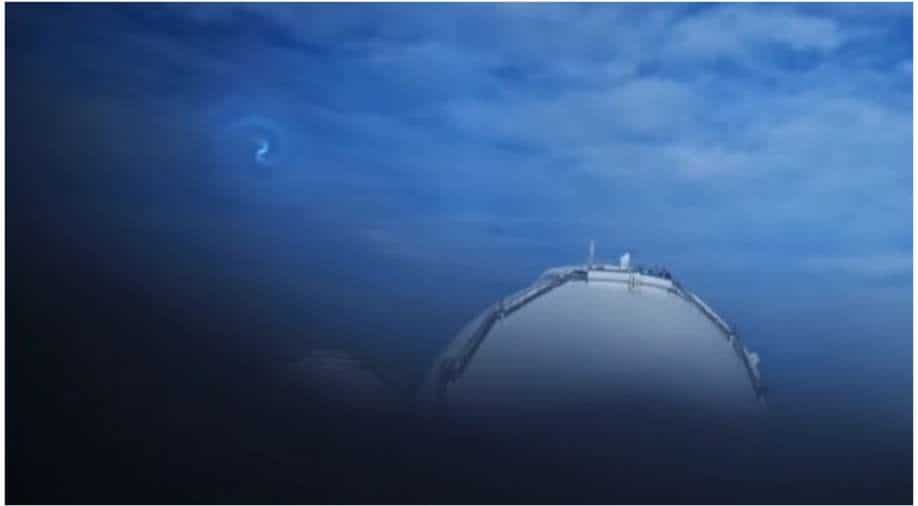 (Image: Subaru Telescope) The 'flying whirlpool' can be seen in the left part of the image. Photograph:( Others )

The skies of Hawaii had a marvelous show on display just a few days ago. The night skies over the island lit up by a tiny speck that resembled a 'flying whirlpool'. The spiral structure spun and spun as it fell till it disappeared.

The spectacle was captured by the Subaru Telescope.

The 'flying whirlpool' emerged in the skies just hours after SpaceX's Falcon-9 launched a spy satellite from California. SpaceX launched the spy satellite for USNRO (US National Reconnaissance Organisation).

The whirlpool seen in Hawaii was upper-stage rocket from the launch falling back to ground after performing the function required of it.

The video above "shows the characteristic spiral caused by the post-deorbit-burn fuel vent of the Falcon 9 upper stage, which was deorbited over the Pacific [Ocean] just after the end of the 1st revolution," Netherlands-based satellite tracker Marco Langbroek told SpaceWeather.com.

The satellite was launched from Vandenberg Space Force Base in California

The Subaru Telescope, which captured the falling whirlpool of the SpaceX rocket, is located on Mauna Kea mountain in Hawaii. It operates at an altitude of 13,579 feet (4,139 meters). It is 8.2 metre optical infrared telescope. It is operated by National Astronomical Observatory in Japan.