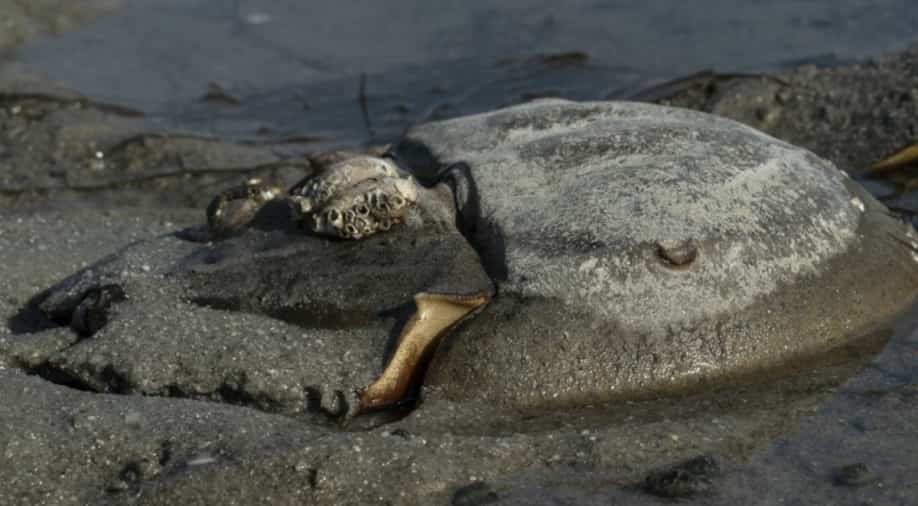 A horseshoe crab is seen on a beach at the James Farm Ecological Preserve in Ocean View, Delaware Photograph:( AFP )

While dinosaurs arose and went extinct followed by transitioning of early fish to the land animals that would eventually give rise to humans, horseshoe crabs have patrolled the planet's oceans for 450 million years

In a new study, scientists have found that horseshoe crabs or Limulidae are vital for vaccine safety. As a result of habitat loss and overharvesting for use in food the "living fossils" are listed as vulnerable in America and endangered in Asia.

While dinosaurs arose and went extinct followed by transitioning of early fish to the land animals that would eventually give rise to humans, horseshoe crabs have patrolled the planet's oceans for 450 million years.

These otherworldly creatures have bright blue blood which replaced rabbit testing to become essential for testing the safety of biomedical products in the 1970s as it clots in the presence of harmful bacterial components called endotoxins.

Laurel Sullivan, who works for the state government to educate members of the public about the invertebrates, told news agency AFP that "They're really easy to love, once you understand them."

"They're not threatening at all. They're just going about their day, trying to make more horseshoe crabs."

Crabs, which are made up of four subspecies, are closely related to spiders and scorpions and are often a misnomer for the animals.

Atlantic horseshoe crabs, which feed by crushing up food, have ten eyes with males being noticeably smaller than females.

"If we can't get people to care and to connect to these animals, then they're less likely to want legislation to protect them," according to Glenn Gauvry, founder of the Ecological Research & Development Group, who helped a campaign that encouraged members of the public to do their part by gently picking up upturned crabs that are still alive.