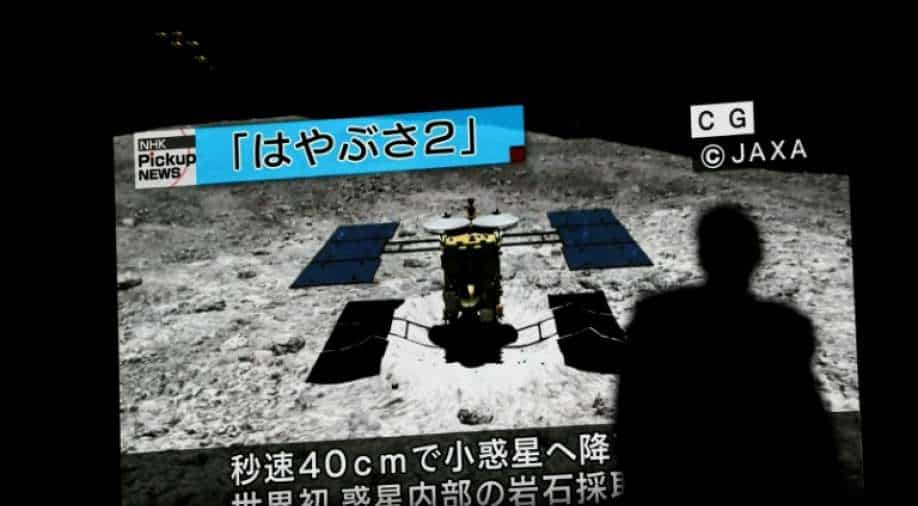 The space probe, launched in December 2014, has already thrilled scientists by landing on and gathering material from an asteroid some 300 million kilometres (185 million miles) from Earth.

Japan's Hayabusa-2 space probe is heading home, but only to drop off its rare asteroid samples before starting a new mission.

The space probe, launched in December 2014, has already thrilled scientists by landing on and gathering material from an asteroid some 300 million kilometres (185 million miles) from Earth.

Scientists from Japan's space agency JAXA have now planned to extend its mission for more than a decade and have targetted two new asteroids.

Before that mission can begin, Hayabusa-2 needs to drop off its precious samples from the asteroid Ryugu -- "dragon palace" in Japanese.

Scientists are hoping the capsule will contain around 0.1 grams of material that will offer clues about what the solar system was like at its birth some 4.6 billion years ago.

The material is in a capsule that will separate from Hayabusa-2 while it is some 220,000 kilometres above Earth and then plummet into the southern Australian desert.

Protected from sunlight and radiation inside the capsule, the samples will be collected, processed, then flown to Japan.

Half the material will be shared between JAXA, US space agency NASA and other international organisations, and the rest kept for future study as advances are made in analytic technology.

After dropping off its samples, Hayabusa-2 will complete a series of orbits around the sun for around six years -- recording data on dust in interplanetary space and observing exoplanets.

It will then approach the first of its target asteroids in July 2026.

The probe won't get that close to the asteroid named 2001 CC21, but scientists hope it will be able to photograph it as it completes a "high speed swing-by".

Hayabusa-2 will then head towards its main target, 1998 KY26, a ball-shaped asteroid with a diameter of just 30 metres. When the probe arrives at the asteroid in July 2031, it will be approximately 300 million kilometres from Earth

Hayabusa-2 will observe and photograph the asteroid, but it is unlikely to land and collect samples, as it probably won't have enough fuel to return them to Earth.

The probe is the successor to JAXA's first asteroid explorer "Hayabusa", which means falcon in Japanese.