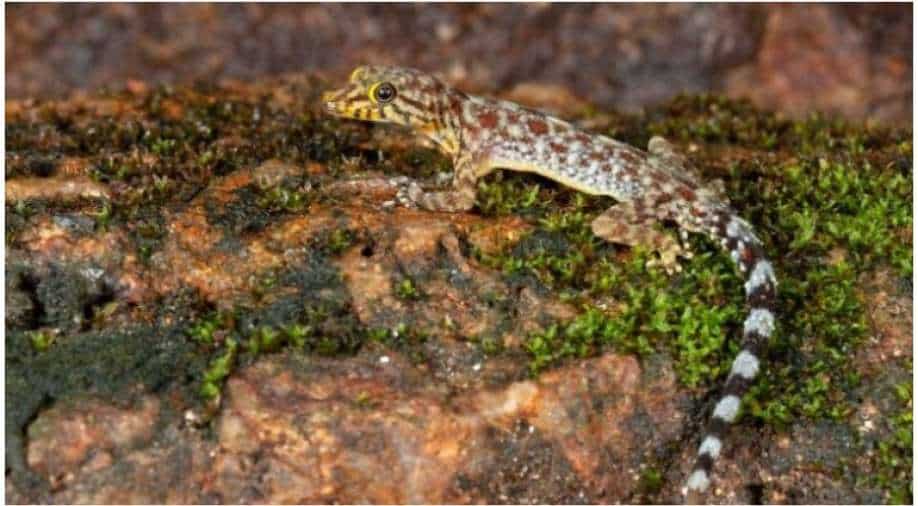 (Image: Saunak Pal) The gecko that has been named after Jackie Chan Photograph:( Others )

The gecko jumped around, moved from rock-to-rock and swiftly hid in rock crevices as researchers tried to capture it in the wild. Ithas been named after legendary actor Jackie Chan who has many action movies to his name

Jackie Chan may not be called an A-lister among Hollywood stars but he has a legendary status. The Kung Fu master has carved his niche by making films only he can make. The nimble-footed actor has acted in many films and is famous for doing his own stunts without a body double.

The superstar has got quite an unexpected tribute from India as Indian herpetologists have named a quick-on-its-foot gecko after Jackie Chan. The researchers have described this in journal Zoological Research.

The gecko is a type of lizard. The one named after Jackie Chan is one of 12 new gecko species found in India.

All these 12 species are endemic to the Western Ghats, a biodiversity-rich mountain range that runs parallel to India's western coast.

Saunak Pal of the Bombay Natural History Society has been quoted in media reports as saying that the gecko named after Jacki Chan would "spring from one rock to the other" and "crawl into the smallest of crevices to escape" researchers' attempts to catch it.

The lizard has been named Jackie’s day gecko (Cnemaspis jackieii).

Zeeshan Mirza, coauthor of the study told media outlets that naming animals in such way may help in people developing connect with the species. He has reportedly identified 60 new faunal species to date, including  Salazar’s pit viper (Trimeresurus salazar), named after Salazar Slytherin from Harry Potter universe.