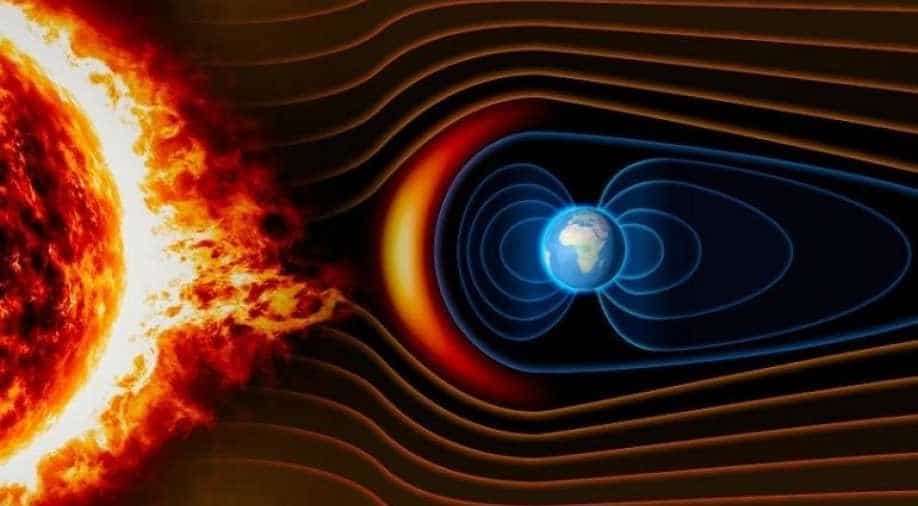 Earth's magnetic field protects our planet from an outflow of charged particles and radiation that stream out from the sun. Image:NASA Photograph:( Others )

Earth’s magnetic field acts like a protective shield around the planet, repelling and trapping charged particles from the Sun.

NASA researchers are tracking an evolving dent on Earth’s magnetic field splitting in two, that could impact satellites, navigation and spacecraft.

Earth’s magnetic field acts like a protective shield around the planet, repelling and trapping charged particles from the Sun.

But an unusually weak spot in the field called the South Atlantic Anomaly (SAA) stretching out between South America and southwest Africa, allows these particles to dip closer to the surface than normal.

Particle radiation in this region can knock out onboard computers and interfere with the data collection of satellites that pass through it, a key reason why NASA scientists want to track and study the anomaly.

The South Atlantic Anomaly, new data has also shown, is weakening and expanding westward. Moreover, it's splitting into two lobes, rather than one large one, which will cause further headaches for managing satellite missions.

If satellites traveling through this weak area in the magnetic field are hit by energized particles, they can short-circuit, glitch or even sustain permanent damage. So satellite operators regularly shut down satellite components when they travel through the anomaly so they don't risk losing key instruments or the whole satellite.

The International Space Station, which is in low-Earth orbit, also passes through the SAA. It is well protected, and astronauts are safe from harm while inside.

However, the ISS has other passengers affected by the higher radiation levels: Instruments like the Global Ecosystem Dynamics Investigation mission, or GEDI, collect data from various positions on the outside of the ISS.

These random hits may usually only produce low-level glitches, but they do carry the risk of causing significant data loss, or even permanent damage to key components.

According to NASA, the Earth's magnetic field is produced by its molten, iron-rich core, which is in a constant state of motion 1,800 miles below the surface. These motions act like a generator, which is known as the geodynamo, and the electric currents that the movements create produce the magnetic field.