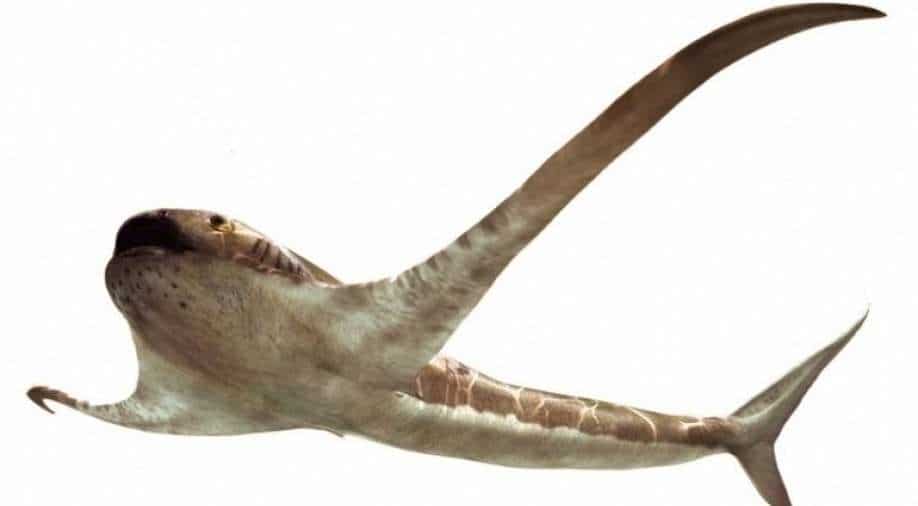 A handout image made available on March 18, 2021, shows a rendition of Aquilolamna Eagle Shark, part of an international research team study led by Romain Vullo of the CNRS. Photograph:( AFP )

Scientists recently found the full fossil of a shark which used to rule the oceans about 93 million years ago. Findings based on the remains of a strange shark species officially known as “Aquilolamna milarcae” were published in the journal Science on Thursday.

Vertebrate palaeontologist and lead author of the study Romain Vullo said the name Aquilolamna translates into “eagle shark”, and that the strange species used to feed on plankton during the time dinosaurs ruled the land. 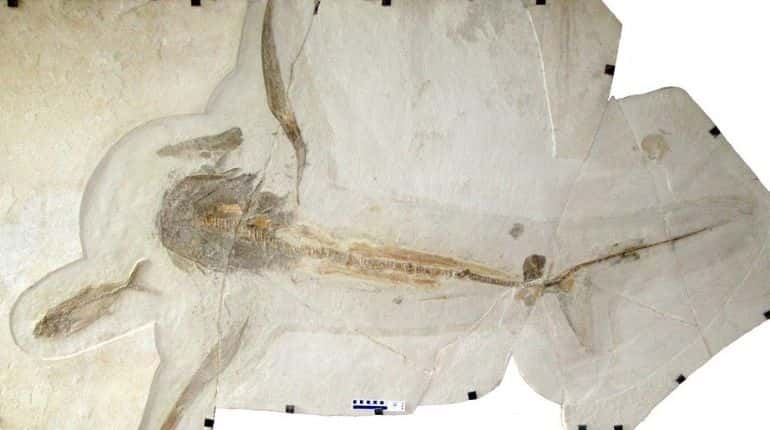 A handout image made available on March 18, 2021 shows a fossil of an Aquilolamna Eagle Shark. Some 93 million years ago, a bizarre winged sharks swam in the waters of the Gulf of Mexico. This newly described fossil species, called Aquilolamna milarcae, has allowed its discoverers to erect a new family. Like manta rays, these 'eagle sharks' are characterised by extremely long and thin pectoral fins reminiscent of wings. The specimen studied was 1.65 metres long and had a span of 1.90 metres. With its large mouth and supposed very small teeth, it must have fed on plankton, according to the international research team led by Romain Vullo of the CNRS. The complete specimen was found in 2012 in Vallecillo (Mexico). | Wolfgang Stinnesbeck / Heidelberg University / AFP

The sharks roamed the seas now situated in northeastern Mexico and had lengthy wing-like fins. The shark possessed a fin span of about 1.9 metres (over 6 feet) and a head-to-toe length of 1.65 metres (over 5 feet), leaving the scientists flabbergasted.

Reuters cited Vullo as saying that the fins “mainly acted as an “effective stabiliser”. Vullo, affiliated with Geoscienes Rennes, the University of Rennes and France’s National for Scientific Research’s research unit said this makes the species only sharks to be wider than long.

"Aquilolamna is indeed a perfect example of an extinct creature revealing an unexpected new morphology. This strongly suggests that other outstanding body shapes and morphological adaptations may have existed through the evolutionary history of sharks," Reuters quoted Vullo as saying.

But it’s not so far fetched from regular characteristics of sharks, including the torpedo-shaped body, and the tail of shark. Its pectoral fins, however, stood out!

Researchers believe that Aquilolamna was probably a slow-swimming shark, feeding on plankton through filter-feeding, akin to what plankton eating sharks do today.

The fossil was unearthed in the Mexican state of Nuevo Leon, but did not reveal its filter mechanism.