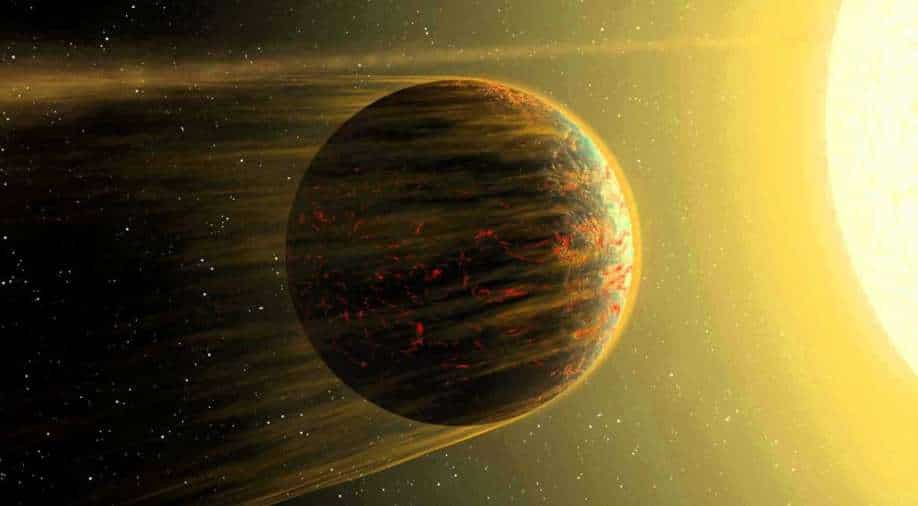 ‘55 Cancri e’ is at about 1/25 distance between Mercury and the sun in our solar system. It orbits fewer than 1.5 million miles from its home star. In 2004, ‘55 Cancri e’ was discovered by researchers. It seems to be 7.99 times as big as Earth. This planet contains high amounts of volcanic activity

NASA is looking to study a unique exoplanet in the Universe. What is special about this planet is that it can be called the epitome of 'hell on earth’. Well, it is absolutely true as it appears to be a red-hot ball of lava and fire. This planet is called '55 Cancri e'. It is also considered a 'super-Earth'. On Thursday, NASA shared its plans to study two exoplanets with the help of James Webb Space Telescope when it ends its setup in the next few weeks. '55 Cancri e' is one of them. The other planet is known as 'LHS 3844 b'. It is cooler than '55 Cancri e'.

Cloudy with a chance of…lava rain?@NASAWebb is set to study two exoplanets known as “super-Earths,” so called because they’re rocky like Earth but larger than our home. One of the planets, 55 Cancri e, could have an atmosphere with rain of lava droplets.https://t.co/0DxEdz9yDK pic.twitter.com/9cULgYHqTg

In a press statement, NASA said, "Imagine if Earth were much, much closer to the Sun. So close that an entire year lasts only a few hours. So close that gravity has locked one hemisphere in permanent searing daylight and the other in endless darkness. So close that the oceans boil away, rocks begin to melt, and the clouds rain lava."

‘55 Cancri e’ is at about 1/25 distance between Mercury and the sun in our solar system. It orbits fewer than 1.5 million miles from its home star. NASA said, "Observations of 55 Cancri e from NASA's Spitzer Space Telescope suggest that the hottest region is offset from the part that faces the star most directly. While the total amount of heat detected from the day side does vary."

Watch: Decoding UFOs: What do we know about ‘flying saucers’?

In 2004, ‘55 Cancri e’ was discovered by researchers. It seems to be 7.99 times as big as Earth. This planet contains high amounts of volcanic activity. "55 Cancri e could have a thick atmosphere dominated by oxygen or nitrogen," said Renyu Hu of NASA's Jet Propulsion Laboratory.