Believe it or not: 630-feet-deep sinkhole with forest at its end discovered in China, says report 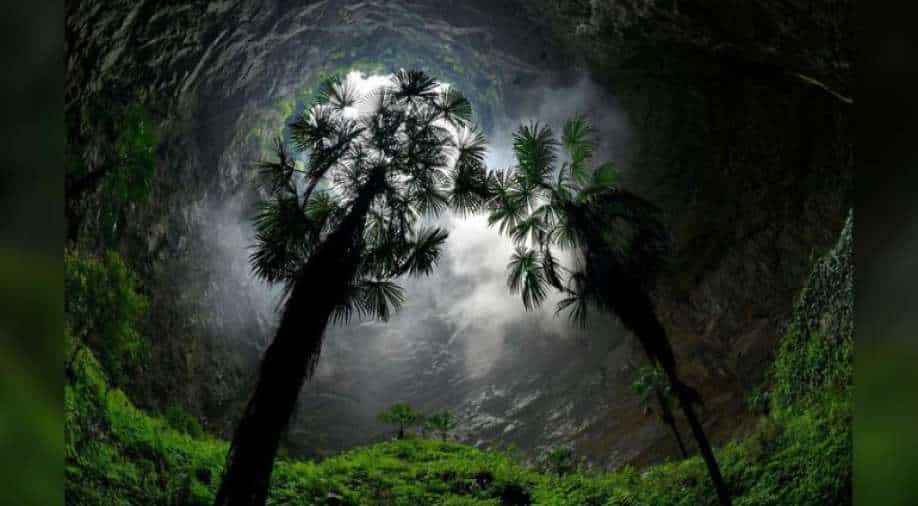 A 630-feet-deep giant sinkhole with a forest at its end has been discovered in China. Photograph:( Twitter )

The sinkhole was found in the Guangxi Zhuang Autonomous Region. It was located near Ping'e village in Leye county, as per Xinhua. On the interior, the sinkhole is 1,004 feet (306 m) long and 492 feet (150 m) wide, Zhang Yuanhai, who is a senior engineer with the Institute of Karst Geology, told the news agency

A new giant sinkhole has been found in China, said media reports. What makes this 630-feet-deep (192 meters) sinkhole special is that there is a forest at its end, reported Xinhua news agency, citing a team of Chinese scientists. Three cave entrances were discovered in the chasm when some speleologists and spelunkers went into the sinkhole on last Friday.

Some ancient trees, which were 131 feet (40 m) tall, were also found. The branches of the trees could be seen stretching towards sunlight, which gets filtered through the entrance of the sinkhole.

The sinkhole was found in the Guangxi Zhuang Autonomous Region. It was located near Ping'e village in Leye county, as per Xinhua.

Giant sinkhole with a forest inside found in China. The sinkhole is 630 feet (192 meters) deep, according to the Xinhua news agency, deep enough to just swallow St. Louis' Gateway Arch. 🧐Beautifully Eerie! pic.twitter.com/EXGUvsbecx

So Rock!🧗‍♂️🧗‍♀️
Giant karst sinkhole exploration in Leye County, who wants to try the “brave games” and venture down into the deep? #CaveStory #sportsbiz #naturelovers #adventure pic.twitter.com/fizXs4pIOB

The cave expedition team was led by Chen Lixin.

On the sinkhole floor, the dense undergrowth was as high as shoulders of a person, Lixin told Xinhua.

Watch: Reaching out to the aliens: Astronomers to relay message in space

"I wouldn't be surprised to know that there are species found in these caves that have never been reported or described by science until now," Lixin added.

This discovery takes the total number of sinkholes found in Leye County till now to 30, Xinhua added.