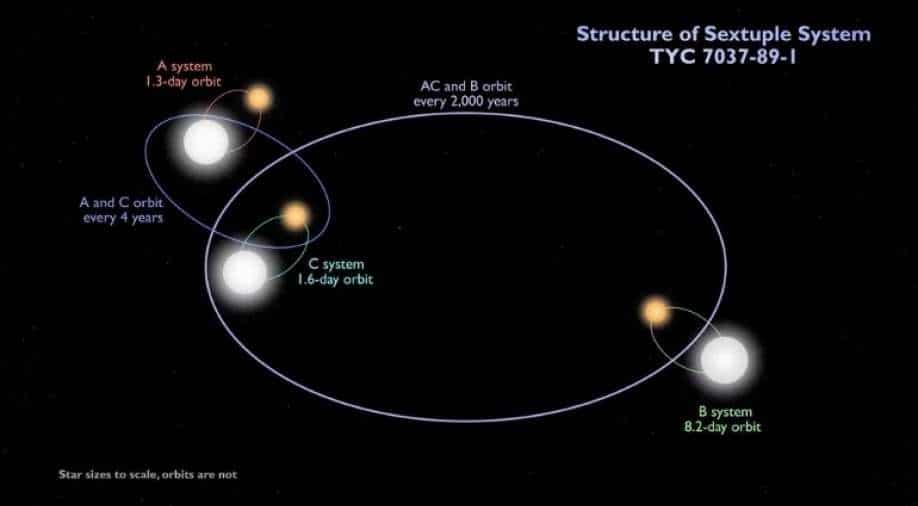 This schematic shows the configuration of the sextuple star system TYC 7037-89-1 Photograph:( Twitter )

The system, also called TIC 168789840, is located about 1,900 light-years away in the constellation Eridanus

In a first, astronomers of the NASA's Transiting Exoplanet Survey Satellite, or TESS have found a system of six stars made of three eclipsing binaries.

The primary stars in all three binaries are all slightly bigger and more massive than the Sun and about as hot. The system, also called TIC 168789840, is located about 1,900 light-years away in the constellation Eridanus.

TESS, roughly the size of a refrigerator with solar-panel wings, is equipped with four special cameras to survey 200,000 stars that are relatively near the sun and thus among the brightest in the sky, seeking out those with planets of their own.

Like Kepler, TESS uses a detection method called transit photometry, which looks for periodic, repetitive dips in the visible light from stars caused by planets passing, or transiting, in front of them.

Researchers analysed the data using autonomous software trained to recognise the tell-tale brightness dips of eclipsing binaries. Among the 450,000 candidates, they identified at least 100 with potentially three or more stars, including the new sextuple system.

The system consists of three gravitationally-bound eclipsing binaries in a hierarchical structure of an inner quadruple system with an outer binary subsystem.

As a consequence of its rare composition, structure, and orientation, this object can provide important new insight into the formation, dynamics, and evolution of multiple star systems.

Martin Still, the TESS program scientist for NASA, said more than 50 rocky, Earth- or super-Earth-sized planets have previously been identified, and NASA expects to increase that number through the new mission.

The most favourable discoveries will undergo closer scrutiny by a new generation of larger, more powerful telescopes now under development that will search for telltale signs of water and “the kinds of gases in their atmospheres that on Earth are an indication of life,” Hertz said.