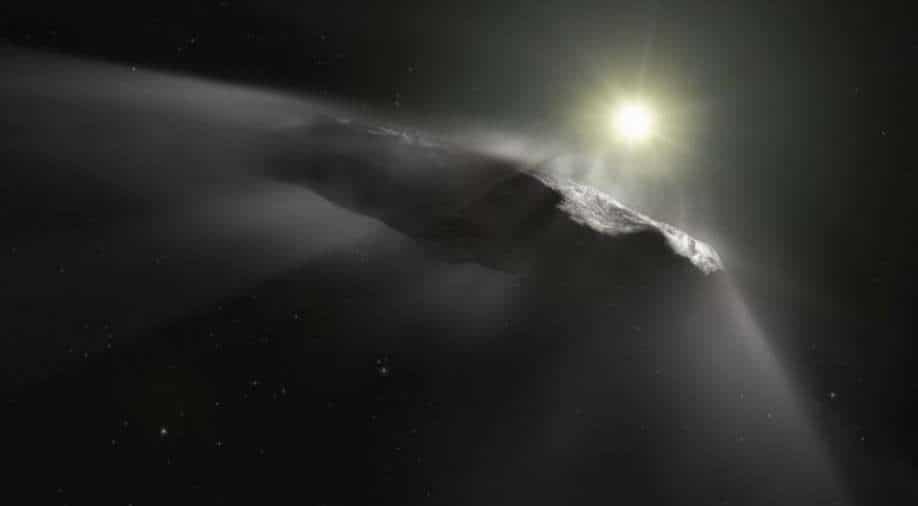 A handout photo released by the European Space Agency on June 27, 2018 shows an artist's impression of the first interstellar object discovered in the Solar System, `Oumuamua. Photograph:( AFP )

Astronomers have detected how many interstellar objects may be visiting our solar system, in a recent study.

The research conducted by Cornell University shows interstellar objects (ISOs) passing through the solar system can be directly observed by Earth-based telescopes and potentially explored at close range by spacecraft.

The aim of the study was to find additional ISOs and planning missions to intercept or rendezvous with these bodies will greatly benefit from the knowledge of their likely orbits and arrival rates.

Observations made with the NASA/ESA Hubble Space Telescope and others show that the object is moving faster than predicted while leaving the Solar System.

Researchers assume that venting material from its surface due to solar heating is responsible for this behaviour. This outgassing can be seen in this artist’s impression as a subtle cloud being ejected from the side of the object facing the Sun. As outgassing is a behaviour typical for comets, the team thinks that `Oumuamua’s previous classification as an interstellar asteroid has to be corrected.

Such missions are feasible with more massive spacecraft (100 kg or larger) using existing rockets and technologies either if they can be initiated around the time of perihelion passage, for example, by a Comet Interceptor type mission or by using a combination of planetary flybys and solar Oberth manoeuvres (rocket accelerations at high speed close to the Sun) to overtake the ISO as it retreats from the Sun.

Marshall Eubanks, the lead author of the study said "[J]ust by proving that they exist, it has had a profound impact, creating a field of study almost from nothing (a field that funding authorities are just beginning to recognize).''

He added, ''Interstellar Objects provide us with the opportunity to study, and in the future literally touch, exobodies decades before the earliest possible missions to even the nearest stars, such as Proxima Centauri."

As per the study, led by researchers from the Initiative for Interstellar Studies (i4is), roughly seven ISOs enter our Solar System every year and follow predictable orbits while they visit the Earth.

The study of 'Oumuamua in October of 2017 was not only was this an object that had formed in another star system, but its arrival and detection implied a large population of such objects.

The detection of 2I/Borisov in 2019 confirmed that ISOs enter our Solar System on a pretty regular basis.

Asteroid surveys may have a streak limit, a limit on the acceptance of fast-moving small objects, in order to reduce confusion with terrestrial satellites.

Interstellar objects likely formed very far from the solar system in both time and space; their direct exploration will constrain the formation and history of small bodies, situating them within the dynamical assembly and chemical evolution of the Galaxy. The velocities of many of these objects in the solar system will make their detection and their exploration by spacecraft challenging, but not impossible with present and near-future technology.

If the number of density estimates based on the discovery of 1I/’Oumuamua are even approximately correct, there should be a number of 1I-type interstellar objects in the solar system at any one time.

Even a fast flyby of an ISO passing through the solar system would be scientifically very rewarding, especially if the object can be subjected to the analysis of impact signatures.

Unfortunately, 2I-type interstellar comets appear to be much rarer, which a much smaller infall rate, and will probably be a once in a decade phenomena.